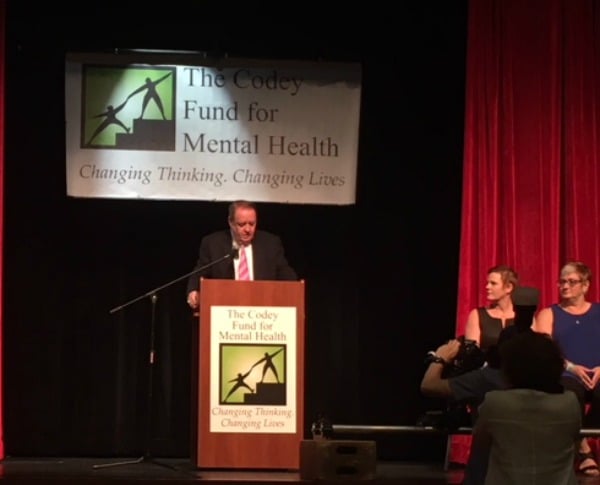 The plan would train auxiliary school staff to help them interact with students who might be at risk and create a statewide teen suicide and depression task force that must make recommendations to the state Legislature by July 2019. Gov. Codey will also introduce legislation to establish a $1 million grant, to be administered by the state Department of Education, that could help school districts hire mental health counselors.

Speaking at Liberty Middle School in West Orange, Gov. Codey noted that although he grew up in his family’s funeral business, he never attended a funeral for a teenager back then. According to the New Jersey Department of Health, the rate of suicide among New Jersey children ages 10 to 18 rose by 16.6% from 2007 to 2016. In the space of just two years–2013 to 2015–2,731 New Jerseyans ages 10 to 24 were treated for suicide attempts.

“There are discussions now about teen suicide in elementary school, middle school, high school and college,” Gov. Codey said. “That may be shocking to some, but it is reality.” (Verona High School recently held a suicide prevention assembly for its senior class that was funded through the American Foundation for Suicide Prevention walk held in Verona Park last fall.)

Marvin Gorsky, the senior director of clinical services for the Mental Health Association of Essex and Morris Counties, said that no one single step will end teen suicides, but he believes that educating all of the people in a student’s school universe–from lunch aides to security guards and office staffers–will help. “They will help make sure that no child falls out of the safety net,” he said. Gov. Codey’s presentation also included remarks by Diane Grossman, whose daughter took her own life last year after being bullied. Grossman has been invited by Verona PBA Local 72 to make a presentation on bullying and suicide prevention in Verona on Tuesday, May 22.

Gov. Codey’s plan is being carried out by The Codey Fund For Mental Health, which was created by the governor and his wife Mary Jo Codey in 2012. The organization stresses that individuals with mental illness must have access to comprehensive mental health care and treatment, and that the stigma associated with mental illness is the single biggest barrier to treatment. The fund’s new executive director is Julie Bannon, who graduated Verona High School with the class of 1977.