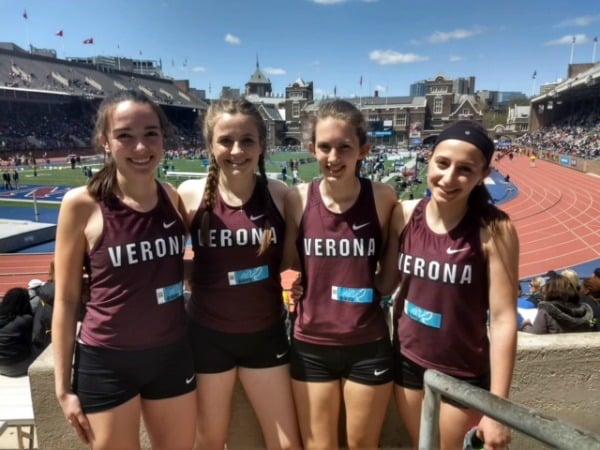 Verona High School’s girls 4 x 400-meter relay team competed in the prestigious Penn Relays yesterday and turned in a time that was a substantial improvement over the time that qualified them for the Penn Relays in the first place.

If you don’t follow track & field, the Penn Relays is the oldest–and largest–track & field competition in the United States. The University of Pennsylvania has hosted it in Philadelphia every year since 1895. Thousands of competitors come from all over the U.S. to participate, and even from outside the country, but they must first meet the qualification for their event. For the 4 x 400m, a team must have run that relay in 4 minutes, 20 seconds or better, either over the winter season or in spring before the deadline set by Penn Relays.

VHS’ team of Kate Ashley, Brianna Rigney, Olivia Fiore and Alexandra DeVivo (l-r, above) qualified with a time of 4:18.5 at the state Group championship for winter track in Toms River in February. Yesterday, on Franklin Field in Philadelphia, they blew that away with a time of 4:10.79.

“This performance was their best of the season,” said Coach Gene Leporati by email after the event. “We had a great experience at the Penn Relays and much fun as we enjoyed the weather and meeting other athletes from all over, while also seeing the surrounding U of Penn Campus.”

Verona’s time put them in third place in their heat, which included the New Jersey schools of Oak Knoll, Freehold, Kearny, Somerville, Scotch Plains, and Monmouth Regional, as well as teams from New York, Pennsylvania and Maryland. But there were strong competitors in the other heats, which pushed Verona out of the running for a medal. The top team, from Jamaica, turned in a time of 3:36.53.