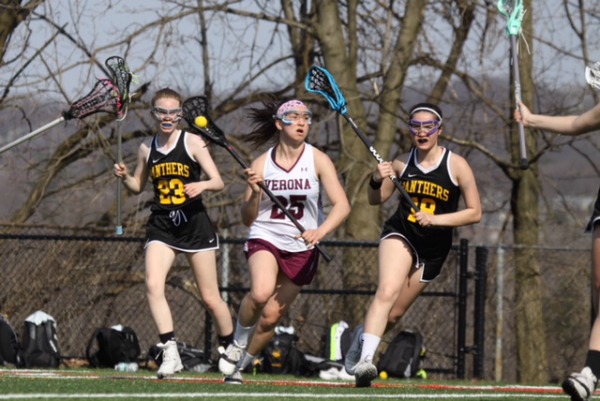 In the first round of the 2018 Essex County Tournament, the #5 seed Verona reminded the #12 seed Cedar Grove that its two-year-old program has a ways to go before the Panthers will be able to challenge their crosstown rivals in the sport of girls lacrosse: The Lady Hillbillies hammered the Panthers to the tune of 15-3 on Friday afternoon.

In the historic first ever meeting between the schools in the sport of girls lacrosse, Verona established dominance quickly, jetting out to a 7-0 lead before the Panthers scored their first goal of the game 10 minutes into the first half.

Three Verona players had hat tricks when @veronaglax defeated Cedar Grove in the first round of the ECT. Here’s one of CC Courter’s three. pic.twitter.com/bBHImSCG6P

Maggie Ashley was very busy in the @veronaglax win over Cedar Grove: a hat trick and 4 assists. pic.twitter.com/o7rH0oejKJ

Taylor St. Laurent (two goals) and Tracy Moreno (one goal) comprised all of the scoring for Cedar Grove in the game.

The Lady Hillbillies played a stifling, physical brand of defense against the Panthers, led by junior Lara Tole, sophomore Clara Frizzi and midfielders CC Courter, Maggie Lonsinger and Ally Madigan, holding the Panthers to only 10 shots on goal for the game.

Maggie Lonsinger, who’s only a sophomore, also had a hat trick against Cedar Grove. Here’s one, with an assist from Julia Mackey. pic.twitter.com/crLZrQnWNx

With the win, Verona advances to the ECT Quarterfinals to face #4 seed Montclair Kimberley Academy on Tuesday, April 24. The full tournament bracket is here.