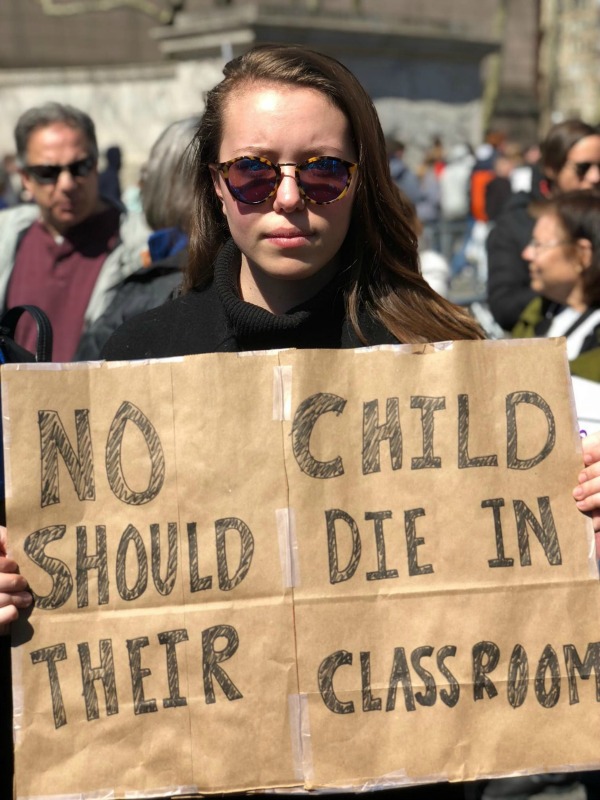 There were more than 800 marches held around the United States and the world today against gun violence and Veronans were at at least four of them: New York, Newark, Morristown and the largest march, in Washington, D.C.

The “March for Our Lives” movement was started by students from Marjory Stoneman Douglas High School in Parkland, Fla., where 17 students and teachers were killed by a gunman in February, but expanded to reflect the toll that gun violence has taken in many American cities, in and out of schools. In Newark, students recalled both classmates and family members who had been killed by guns, and called for students and adults to demand that politicians vote for common sense reform, including universal background checks. New Jersey Gov. Phil Murphy was among the elected officials at the Newark rally, and he noted that he was proud to have received an “F” from the NRA.

Verona has not had the level of gun violence that Newark has had, but there has been some: Daniel Pritchard was shot and killed during a robbery at the Sunoco station in February 2009. And some Verona families have been touched by gun violence beyond our borders. The Nulty family, who march in Newark today, lost their nephew Brendan Tevlin to a shooting in 2014. A former Verona family had moved to Parkland and their daughter attends Marjory Stoneman Douglas High School; she survived, but lost several friends in that shooting. The Newark marchers also included Chloe Mathewson and Anna Konrad-Parisi, who were among the organizers of the March 14 walkout at Verona High School to honor the Parkland victims, and George Cortese, who created a music video advocating for common sense reform.

The Hayter family, who has children who attend F.N. Brown and H.B. Whitehorne, marched in Newark. “We marched in Newark to lend our voices to the collective call for politicians to stop being in the pockets of the gun lobby and pass sensible gun control laws,” said Jonathan Hayter. “As a parent of school-aged children, I want to protect them from senseless gun violence. I also wanted to bring my kids to their first March so they can see democracy in action.”