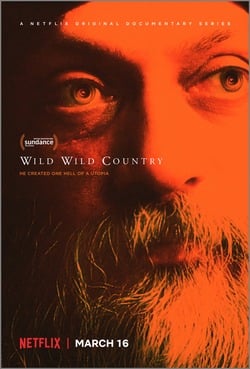 We now think of Kip’s Castle as a quiet bit of bucolic parkland on Verona’s eastern border. But in 1980 it was the headquarters of a cult that is the subject of a new documentary on Netflix, Wild Wild Country.

Textile magnate Frederic E. Kip built the 9,000-square-foot mansion in 1902, and it was used as a private residence for many years after Kip sold the estate in 1926. In 1980, Kips was bought by the Bhagwan Shree Rajneesh, an Indian guru who believed in group sex as therapy. “We are very concerned,” a neighbor to the property told The New York Times in 1981,”about our property values, our children and about this becoming an international headquarters for a free-sex cult.”

The Bhagwan and his followers did not remain long at Kips; he sold the property in 1984 to a law firm. But some effects of their stay were long-lasting: Several of the mansion’s windows, which have been attributed to Tiffany Studios, disappeared from the house while the Bhagwan owned it. Essex County acquired Kips in 2007 and has been restoring it.

The Netflix documentary doesn’t get into the Bhagwan’s stay in Verona, focusing instead on what happened at the Oregon ranch that he also owned at the time. In Oregon, the Bhagwan’s personal secretary allegedly tried to murder his personal physician, poison public officials and use salmonella in a bioterrorism attack to alter a local election. That all doesn’t necessarily make for family-friendly viewing, if you are looking for something to binge watch during today’s snow storm.