Inside An Active Shooter Drill 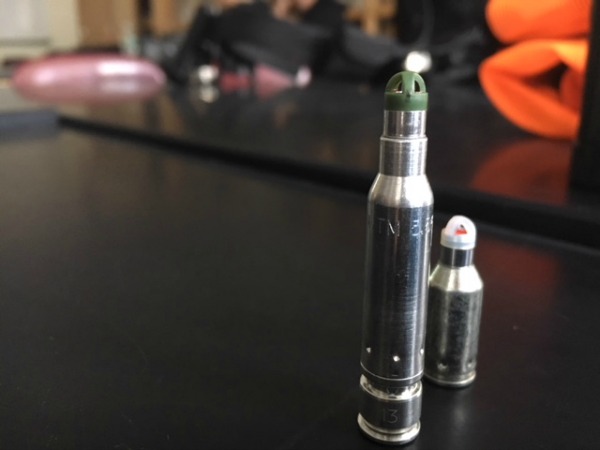 This is a drill. This is only a drill. But there are metal casings all over the school’s hallways and the acrid smell of something that shouldn’t ever be smelled in a school–gun activity. It’s only a drill but it is deadly serious because of the 13 people killed at Columbine High School in 1999, the 32 people killed at Virginia Tech in 2007, the 28 young children and teachers killed at Sandy Hook Elementary School in 2012, the 10 students killed at Umpqua Community College in 2015 and the 17 students and teachers shot dead at Marjory Stoneman Douglas High School just last week.

And because of the reality that a mass shooting could take place anywhere in America at any time. Including Verona.

I’ve been brought to a public school in Livingston by Verona Police Department Acting Chief Christopher Kiernan and Officer Justin Nielsen to watch how law enforcement now trains to thwart an active shooter situation. There are other officers from Verona in attendance, as well as police from several other towns in northern New Jersey. Some will participate in just one four-hour practice session, others will be here all day, or return tomorrow. One Verona officer is participating in his eighth drill.

The training is needed, and not only because of the sheer number of school shootings, and mass casualty shootings like the ones at the Pulse Nightclub in Orlando in 2016 and the Harvest music festival shooting in Las Vegas last year. The instructors make it clear that bad guys now are much more willing to shoot it out, and have the firepower to do so. And they make the objective of law enforcement equally clear.

“Our focus,” says Belleville Police Department Officer Chuck Mollineaux, “is to take the shooter’s attention off the innocent lives in the room and put it on us.” 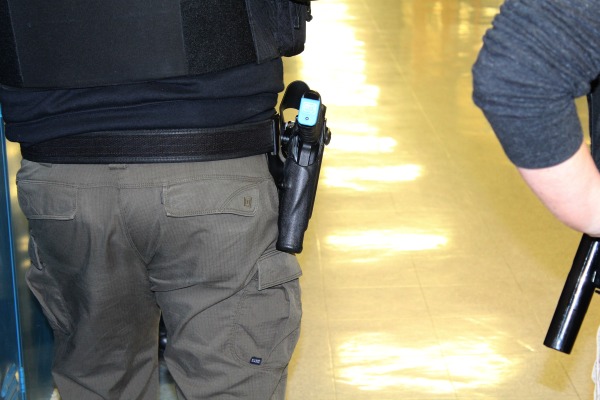 The officers drilling around me are made to understand that gone are the days of waiting for a SWAT team and descending on a shooting scene en masse. If something happens in their communities, they may need to respond as a single office, or in small groups of officers, and that is how they train, over and over, alone and in groups of twos, threes and fours.

There is another difference for Officer Nielsen, who has been an instructor at past drills, some of which have taken place in Verona schools. Nielsen, a Verona High School graduate, went on to serve eight years in the U.S. Army in Afghanistan and Iraq, where he would clear buildings of threats with a cohesive, consistent unit. The officers who handle active shooter situations here, however, may find themselves responding with officers from other towns who they don’t know. At these drills, officers learn to speak the same language and quickly create a cohesive group.

So they learn ways to approach, enter and move through a building, and go through a series of scenarios to counter. (To protect the methods used, I have agreed to not describe them in detail.) After each, there is a debriefing and a review of what they did right–and wrong. In one scenario this day, officers mistook a reenactor posing as school janitor for a bad guy. But the officers also successfully cut through noise and distractions to find the bad guys and stop them. The drills are as mentally exhausting as they are physically taxing.

While there is no direct cost to Verona for participating in an active shooter drills–no tuition to pay–there are plenty of indirect costs. If officers are scheduled to be be working here on the day of a drill, the duty roster must be adjusted so that Verona remains covered. (Acting Chief Kiernan stresses, however, that no overtime is incurred.) Verona has made sure that every officer on our force has been through an active shooter drill at least once, and most have trained multiple times. And then there is the cost of the training ammunition and equipment that departments must bring with them to drills; the ammunition alone can run to $500 for a multi-day drill.

And no, none of this is reimbursed by the county, state or federal government.

That is of little import to the officers, both participants and instructors, because they know what is at stake. “This is one of the hardest things that you will ever be asked to do,” Nielsen tells the class at the end of the day. “You won’t get a second chance to get it right.” 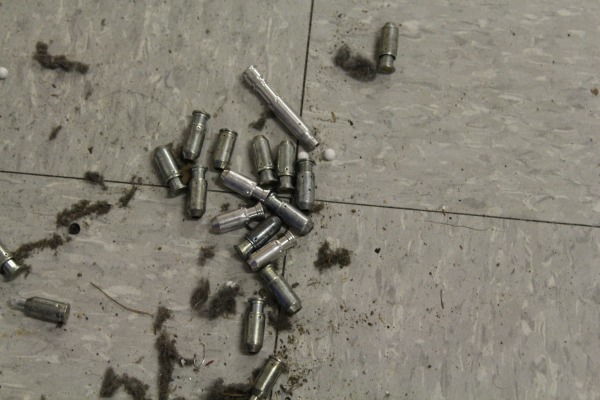