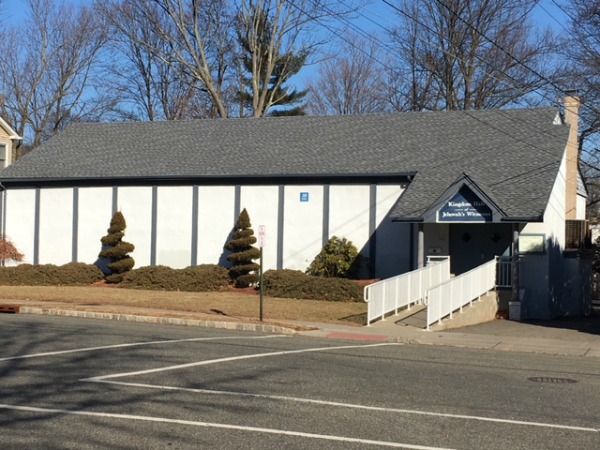 The Jehovah’s Witness Kingdom Hall located at 42 Personette Avenue been listed for sale, becoming the second house of worship in that area of town to be put up for sale in the last 12 months.

The property is an 87′ x 165′ lot at the intersection of Gould Street and Personette, near H.B. Whitehorne Middle School and the center of Verona. It is listed at $549,000. The listing says that the building has seating for up to 200 as a house of worship and there is on-site parking for 20 cars. It could be used by another house of worship or private school without a zoning change, or converted to residential usage with a zoning change. There are currently residential zones with single-family homes on either side of the property, as well as behind it on Linden Avenue.

The Kingdom Hall is just steps from the site of the former Congregation Beth Ahm, which was sold to developers last fall after its purchase by the Verona Town Council was scuttled by a petition drive. The Council had been hoping to use that corner property as a new location for the Verona Rescue Squad. John MacEvoy, the developer who eventually bought 56 Grove Avenue, said last October that he was considering three redevelopment options: as a house of worship for another congregation, a private school or as affordable housing. The latter two plans would likely require approval from zoning authorities but no plans have been presented yet. (The Town Council disclosed last September that developers were considering affordable housing construction on four other sites in Verona.)

UPDATE: Darnell Reamer, a Jehovah’s Witness elder who attended meetings in Verona, said on Thursday, February 1, that while the Verona location is still open, it is not being used as much as it has been in the past. Two Jehovah’s Witness groups had been meeting at the location, one English-speaking and the other Creole. He also said that the location had been a Kingdom Hall since the 1950s.