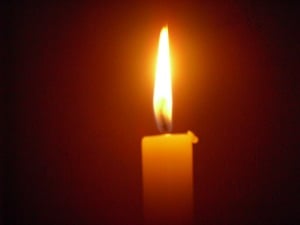 Born January 30, 1914 in Elizabeth, N.J., Edith Ann Drake was the fourth of six children of Emily Bainbridge and Walter Drake, recent immigrants from England, and the first one to be born a U.S. citizen. Her childhood was spent in Staten Island, where her father, an architect, designed and built their family home. After her father’s death in 1928 she began working to help support her family. Shortly thereafter, she married William Edgar Dunfee. They remained married until his death in 1981.

With an architect father and an aunt and mother who were dressmakers, Edith came by her sense of style honestly. She was a fantastic seamstress and made clothes for herself, her daughters and grandchildren. She was also the designated personal shopper for everyone in her family, making trips to Macy’s, B. Altman’s and Lord & Taylor whenever anyone in the family needed something new – a party dress, work suit, dress coat or accessories of any kind. Everything she picked out was always perfectly suited to the recipient. The artistic genes prevalent in her family showed through in her musical talents, as well as the musical talents of her two daughters. Edith played piano by ear without ever taking a lesson and, after her husband passed away, she took up the guitar, enjoying making music in a different way.

As a new bride she and her husband both worked in order to make ends meet. This was only possible because childcare was provided by her husband’s extended family, notably his sister Ethelyne Dunfee Berghorn and his mother Annie Kelly Dunfee. When her husband enlisted in the Merchant Marines during World War II, Edith continued to work out of necessity. She always had a strong belief in women’s rights, no doubt solidified during her time as a struggling single mother. After the war ended she and her husband both worked full-time while also starting a side business investing in real estate — renovating homes, building homes and owning and managing apartment buildings.

After moving into Manhattan in 1959, Edith never looked back. Starting on the Upper West Side, then moving to Gramercy Park, they finally settled into their apartment in Peter Cooper Village in 1971, where she lived until she died. Edith enjoyed the city; she walked everywhere, enjoyed the theater and especially enjoyed the proximity to major department stores. Most importantly she enjoyed just being a New Yorker, being in the hub of it all, part of the most exciting city in the world. She was a news hound, reading The New York Times religiously and watching any and all local New York news programming. Her absolute favorite TV personality was David Letterman.

In the years after her husband passed away, she became involved with the English Speaking Union, helping immigrants learn English. During this time, her biggest indulgence were the many cruises she took during the 1980s as a member of the World Ship Society, the premier group of maritime and naval historians. She enjoyed many VIP cruises on the QEII and the Queen Mary and made many good friends among this likeminded group. There is no doubt that both of these activities helped her feel connected to her English heritage and ancestry.

Finally, Edith was always looking forward, never dwelling on the past. She disdained “Golden Age thinking” making sure to remind nostalgia-seekers about the Depression, as well as the human condition in the days before Social Security, Medicare, labor unions and civil rights. Born before women’s suffrage, she took seriously her right to vote and never missed participating in an election. In 2016 she proudly cast her vote for the first woman presidential candidate, Hillary Clinton, and her story was featured with other centenarians in a book called We The Resilient: Wisdom for America from Women Born Before Suffrage.

Her life was full, healthy and happy until the very end, and the family was looking forward to celebrating her 104th birthday next week. We have all learned much from her progressive spirit and practical outlook on life. Because of her firm belief in the power of the democratic process and equal rights for all, the family requests that, in lieu of flowers, any donations be made to the American Civil Liberties Union. Family and friends gathered at Orange Lawn Tennis Club in South Orange on Wednesday, January 24.