Facebook
Twitter
Pinterest
WhatsApp
- Advertisement -
Three major cleanups of important green spaces, 17 site plan reviews, an expanded walk and bike to school day, and efforts to get town government to reduce both greenhouse gas emissions and impervious cover: All that and more is a year in the life of the Verona Environmental Commission (VEC).

The work was detailed in the annual report that the VEC is required to submit to the town manager and Verona’s mayor and Town Council. The role of the all-volunteer commission is to study environmental issues such as open space preservation, air pollution and noise control, the management of water resources and solid waste in Verona and make recommendations to the Council and the Planning Board. The VEC also provides environmental information and programs for residents.

On April 2, the VEC led the first of three cleanups of green spaces in Verona. It had more than 70 people participate in a cleanup of the West Essex Trail that starts near Verona High School, a cleanup that collected 10 truck loads of trash and a buried pickup truck. Later that same month, the VEC hosted a cleanup and tree seedling giveaway at Grove Park, the pocket park that is Verona’s newest green space. More than 300 seedlings were given out at the event. The VEC’s annual cleanup of the woods behind F.N. Brown School took place on June 3, when it directed community in restoring trails, fixing a foot bridge, and removing invasive plants.

- Advertisement -
The VEC also took on several new initiatives. To make recycling more user-friendly, it collaborated with Sustainable Verona to put together the first visual list of what Verona can recycle. To help Verona officials understand the environmental impact of development, it shared with the Town Council an assessment of impervious cover in Verona that had been prepared by Rutgers University. (Impervious cover refers to the structures or paving that cover a land area and make it impossible for rain or snow to filter through to the ground below.) That review found that approximately 31.5% of Verona has impervious cover, suggesting that the streams in Verona are likely non-supporting, the VEC says. The Commission also petitioned the Council to adopt a resolution committing it to take steps to reduce greenhouse gas emissions.

You can read the full annual report here. 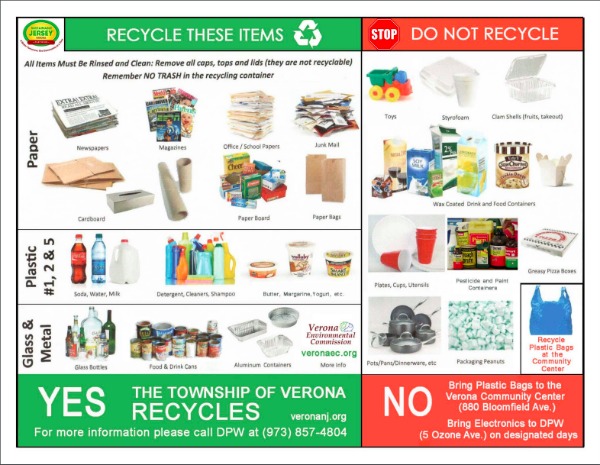