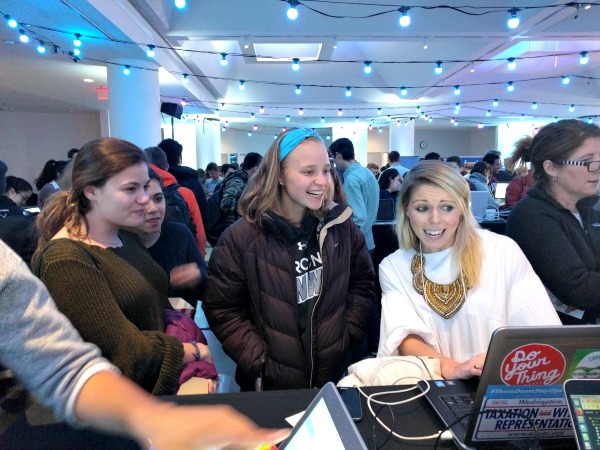 If you’re in the movie business, you covet an invitation to the Cannes Film Festival or Sundance. But if you’re a young person in the field of computer science, the invite you most want may be to Harvard University’s CS50 Fair, the annual exhibition and party where Harvard students exhibit their final projects for the world’s best known college computer science course.

“The CS50 Fair showed me that what we are doing is really something that is within our reach,” said VHS sophomore Frankie Lavery. “Looking at the projects and understanding how to create helped me see that I could do this if I chose to. Talking to the students helped me feel more comfortable with coding and it helped me understand the possibilities.”

Sloan Lawless was stunned by the size of the event. “At first I was very overwhelmed walking into the convention because I did not know where to start,” the sophomore said. “There were so many rows of college students sharing their projects using what they learned in computer science classes. I was very surprised that I was able to understand how they made their project and ask them questions that I can learn from.”

On Friday, December 8, the students boarded a Boston-bound bus with Rich Wertz and Danielle Mutovic, who both teach computer science at VHS. The trip was the outgrowth of an expansion of the VHS comp sci program that happened, in part, thanks to Harvard.

In 2015, Verona decided that, beginning in the 2016-2017 school year, it would add AP Computer Science Principles to its curriculum. Around that time, Harvard decided to make the curriculum of its freshman computer science course, CS50, available as an option for high schools offering AP CS Principles. CS50 has the highest enrollment of any Harvard course and its online version, offered for free through EdX, is one of the 50 most popular online courses. CS50 is held in such high regard that when Yale needed to reinvent its freshman comp sci course, it adopted CS50 from its arch-rival rather than develop its own.

Mutovic attended a professional development with Harvard’s CS50 staff in the spring of 2016 and has since maintained a relationship with its instructional staff, including Professor David Malan. That relationship led to the invitation to this year’s CS50 Fair, and to VHS students seeing what they can do with what they have learned.

“It was great to see how some of the more simple projects at the fair are programs that I could see myself coding in the future,” said Max Handler, also a sophomore. “It showed me how far I have come in a subject that I knew nothing about three months ago. I am interested in discovering how some of the Harvard students connected their code to a physical objects that carried out specific tasks. For example, there was one project where a lamp read sound frequencies and acted like a tuner, but also changed colors for every different sound that it read. In the future, I would like to expand my programming skills to the point where I know how to run programs on objects other than just laptops and PCs, just like some of the students at the fair.”

While most of the weekend was about bits and bytes–the kids also visited Boston’s Museum of Science, which had Computer Science Week exhibitions–they did a bit of regular Boston tourism, too, including duckpin bowling, the Freedom Trail, the Old North Church and Faneuil Hall.

For Izzy Williams, perhaps the best view may have been of what lies ahead. “It was amazing to see the breadth of coding and computer science’s capabilities,” she said. “We saw projects relating to Latin poetry and Japanese writing characters, in addition to more traditional social media and collaboration websites. Also, it was really cool to interact with Harvard students and see they all had a variety of interests, passions, and talents that they combined with computer science. As a senior, it made me really excited to go to college and hopefully integrate other subjects into the things that I am already passionate about.”[ngg_images source=”galleries” container_ids=”331″ display_type=”photocrati-nextgen_basic_thumbnails” override_thumbnail_settings=”0″ thumbnail_width=”100″ thumbnail_height=”75″ thumbnail_crop=”1″ images_per_page=”25″ number_of_columns=”0″ ajax_pagination=”0″ show_all_in_lightbox=”0″ use_imagebrowser_effect=”0″ show_slideshow_link=”1″ slideshow_link_text=”[Show as slideshow]” ngg_triggers_display=”never” order_by=”sortorder” order_direction=”ASC” returns=”included” maximum_entity_count=”500″]