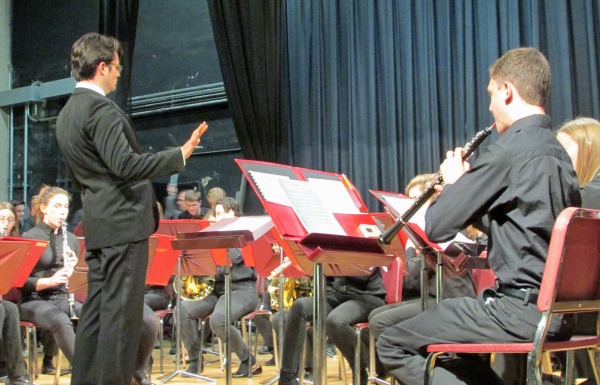 The talented musicians of Verona High School will host their 2017 Holiday Concert at 7:30 p.m. on Wednesday, December 20. The annual, crowd-pleasing concert will feature instrumental performances by the VHS Concert Band and Verona Jazz and Beyond, as well as smaller instrumental groups. Also performing are the VHS Concert Choir, Chamber Choir and the Vocal Jazz Ensemble.

The Verona Concert Band will kick off its concert season with the crowd-pleasing “Nutcracker Suite” by Pyotr Tchaikovsky. This continues the ensembles educational journey with Tchaikovsky’s music as they also played excerpts from his Fifth Symphony earlier this year in the Marching Band show “Fives.” The Verona Concert Band is made up of ninth through twelfth grade students and it encompasses every member of the instrumental music department, with a focus on quality literature within the spectrum of a holistic music education. The Concert Band is under the direction of Erik Lynch.

Verona Jazz and Beyond will perform a range of holiday music, from jazz to soul. The Verona High School Brass Choir will also take part and both of these groups are under the direction of Max Morden.

The Vocal Jazz Ensemble will be performing their rendition of seasonal holiday selections, directed by Judy Szybist. Concert Choir and Chamber Choir have also been hard at work perfecting their vocal pieces and are under the direction of Sean Clancy. As always, alumnae of the program and all music lovers will be invited to join in the singing of the “Hallelujah Chorus”, led by the Concert Choir, to cap off the evening.

The Verona High School Holiday Concert encapsulates all that is wonderful about the VHS Music Program with each and every group represented in the show. Come and get into the holiday spirit with these passionate musicians!

The concert will be held in the Verona High School auditorium, 151 Fairview Avenue. Admission is free.