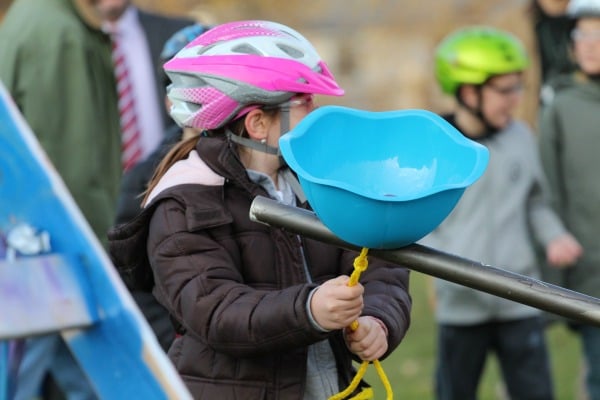 If you need a refresher course in potential energy and compound machines, you might want to spend some time around H.B. Whitehorne. Verona’s middle schoolers learned about those things and other aspects of physics by building the catapults, slingshots and trebuchets that fired an awful lot of apples and pumpkins across Bucky Hatchett Field this past Thursday afternoon.

Three years ago, HBW introduced an after-school club devoted to science, technology, engineering and mathematics–STEM for short. Led by Julia Harth, the club empowers students to brainstorm and test STEM solutions to different problems rather than follow a rote set of directions. The club has become a fun way to help students explore the basic principles that govern the physical world: From the laws of motion and electromagnetism, to relativity and thermodynamics. The kind of stuff that they will need to build better cars and buildings, design safer healthcare, and give us energy options beyond oil and gas.

To pique interest, Harth shows her students models of pumpkin-chucking machines, and imposes a few rules: No pneumatic canons, no devices that can’t fit through the door to go outside and no safety hazards. Students must submit a design before they begin building, but if it doesn’t work, it is up to them to figure out how to correct the problem.

On Thursday, the 19 teams of students paraded their machines out to the HBW field. They test-fired them with apples before putting them through three rounds of pumpkin launches. Bicycle helmets were encouraged and strict safety procedures were followed. “These machines are better than they have been in the past,” cautioned Harth, “which also makes them more dangerous.”

Not every device worked as intended, as bungee cords slipped and the pasta colanders that many students used to hold their apples and pumpkins on their catapults came loose. (Catapults, for the record, launch a projectile, while trebuchets–a siege engine that the French perfected in the Middle Ages–hurl it.)

But some showed a remarkable degree of sophistication. Eighth graders Alec Hamson, Addison Marriott and Jimmy McHugh–who have participated in the club since its inception–produced a slingshot design with a winch that they tightened after each firing. “We didn’t think we would be able to shoot far enough with the restrictions we had for the project,” Hamson said. “So we used a slingshot instead of a traditional catapult.” The metal bucket that contained their apples and pumpkins was guided by thick rubber straps, which the team took pains to protect from the cold, covering them with their jackets between launches. “The warmer it is,” Hamson said of the rubber, “the farther it shoots.”

And Team 14’s pumpkins shot pretty far. Their top distance was 42 feet 9 inches, almost twice as far as the fifth place team. They’ll get a chance to go farther when they move up to Verona High School next fall: VHS just sent its own pumpkin catapult team to an American Society for Mechanical Engineers’ competition at Rowan University.

Here are some outtakes from the afternoon’s activities:

- Advertisement -
Previous articleAdvent, Christmas At Holy Spirit
Next articleShouldn’t All Education Be ‘Special’?