Eagles A Team Has Championship Season 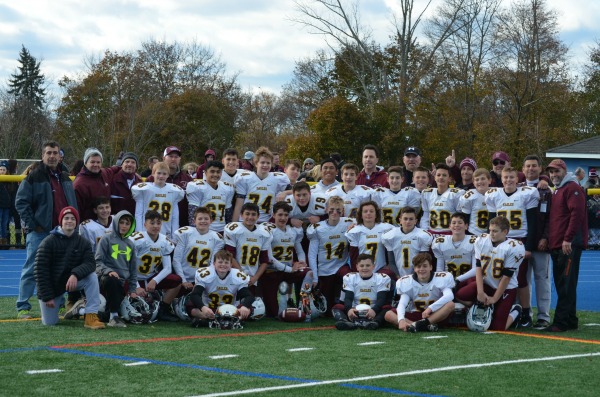 The A Team’s 21-8 win over Fairfield ​in the youth league’s “Super Bowl” was the result of 45 well-executed plays that day–and a season of hard work. “The offensive line was stellar,” said Head Coach Joseph ​DeVivo, “and the defensive line and secondary were awesome. Special teams played important part as well.” The A Team is composed of seventh- and eighth-grade students. The Eagles program, which has operated in Verona since 1966, fields four teams, beginning with players in the second grade and also sponsors cheerleading squads.

The A Team actually scored on the opening kickoff of the championship game but it was returned for a penalty. Fairfield, which Verona had previously defeated 12-0 in the regular season, then got on the scoreboard on a 60-yard touchdown run and made the two-point conversion. That was to be Fairfield’s last voluntary trip to the end zone: Verona sacked the Fairfield quarterback in the end zone in the second quarter for the safety.

Verona’s first full-fledged score was the result of a James Haveron offensive, and after the extra point the score was 9-8 for the Eagles. Verona’s defense held solid on the ensuing plays, and there were multiple sacks by ​Marcos ​Czupak and Zachary ​Benanchietti.

When Verona’s offense got back in control of the ball, quarterback Cael ​Zebrowski used two well-thrown passes to move the team downfield, culminating in a 20-yard touchdown pass to Joey Petro.

The Eagles didn’t let up after halftime, with the defense causing two Fairfield fumbles and recording multiple sacks. Verona clicked on all cylinders in the fourth quarter, executing 10 plays, including a 40-yard pass to Czupak that put Verona on Fairfield’s two yard line. Haveron then ran in one final touchdown for the 21-8 win.

This was the team’s record: