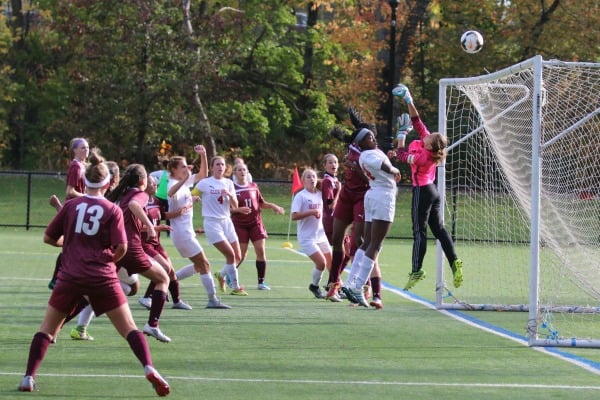 Verona, which had entered the playoffs as the number 11 seed, had knocked off number 6 seed Roselle Park in the opening round before scoring an even bigger upset against number 3 seed McNair Academy in round two. Verona then edged out tenth-seeded Dayton, which had also tumbled two higher ranked teams, when they met in the semifinals.

But the final against Glen Ridge was a different matter entirely. Verona’s defense was strong but it was not enough to contain Glen Ridge, which had come into the matchup with five straight sectional titles behind it.

In the first period, the Ridger’s Tara Feenaghty scored her first of what would eventually be three goals on the afternoon. Teammate Lindsay Jaiyesimi also found the net, creating the 4-0 win. Verona’s Ally Madigan came close to scoring with a free kick that hit the net post but Verona couldn’t otherwise break through. Verona goalie Anna Rosinski, who had had a series of spectacular saves in the Dayton match, was credited with 13 saves yesterday.

Rosinski and Isabel Latorre are the only two players that Verona will lose to graduation next June. Madigan, Sarah Carlucci and Lara Tole, who have been significant drivers of the Verona offensive this year, are among the seven members of the class of 2019 who will be back. Tole finished as the team’s high scorer on the season/ The team has also had a number of standout players from the class of 2020 and even 2021.