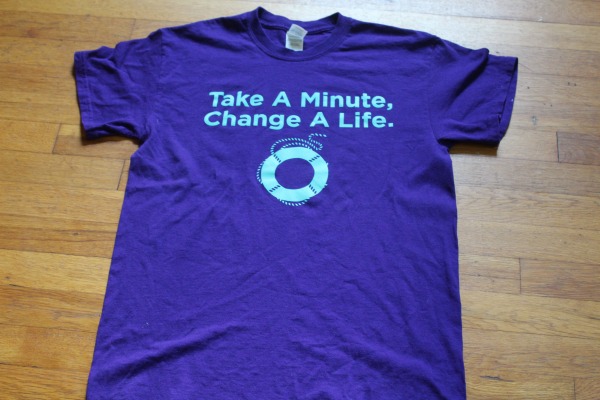 The Verona High School and Ramsey High School football teams will be squaring off on Saturday, September 30, but their biggest challenge won’t be on Sellitto Field.

The teams, which don’t usually play each other, will be using the game to raise awareness about suicide prevention. Both teams will be wearing socks in the signature purple and teal colors of the American Foundation for Suicide Prevention, and Verona’s cheerleaders, color guard and marching band will be adding purple and teal ribbons to their usual maroon and while uniforms. (The game is not the only awareness effort going on at VHS: The girls volleyball team has been wearing purple and teal ribbons in their hair all month to show their support of teammate Brooke Cooney, in honor of her brother Dan.)

“When I was approached about raising awareness about suicide prevention, I thought it was very important for us as a school and athletic department to get involved,” says Robert Merkler, Verona’s director of athletics. “At this age, it is very tough as not only are our students dealing with the pressures of school, social life, and being a teen, but also with trying to learn about yourself. Often it is difficult to understand what a child is thinking or going through. This is just a small gesture on our part, but I am hoping that by us teaming together with Ramsey, maybe it helps open up a dialogue with a student from Verona or Ramsey who is struggling and we can help them get through what they are facing.” The game will also kick off the Week of Respect program at VHS.

Ramsey Principal Dr. Michael Thumm echoed Merkler’s sentiments. “Although Ramsey and Verona will be competitors on the football field,” he says, “it is great that our schools and our students support each other in efforts like suicide awareness.” Thumm noted that Ramsey’s athletic director, Jim Grasso, has worked to promote student wellness in its health and physical education department, and the school participates in Bergen County’s Stigma Free Initiative. That program is designed to educate residents about mental illness, and raise awareness of local mental health resources.

“We consistently stress to our students that there is always an adult in our building who can help if a student or a peer is struggling with an issue,” Thumm adds. On September 20, a group of Ramsey students participated in a suicide and mental health awareness exhibition at Ramapo College called “Send Silence Packing.” The exhibit featured 1,100 backpacks and personal stories of college students who died by suicide. “It’s a visually stunning reminder of the prevalence of mental illness and suicide,” Thumm notes.

The socks for Verona’s football players, and accessories for other fall sports teams, have been donated by the Verona Education Association, which represents the district’s teachers and paraprofessionals. “When the VEA learned the athletic department was looking for a way to increase suicide awareness among our students our community outreach committee decided it was incumbent upon us to be involved in the project,” says Carol Thomas, VEA first vice president and a science teacher at H.B. Whitehorne Middle School. “The purple and teal accessories to be worn by fall athletic teams are intended to be a reminder to everyone that we all have a role in preventing suicide.” (The cheerleader, color guard and marching band ribbons were donated by Verona residents Sharon and Manny Licitra, owners of Mia Famiglia in Millburn.)

Ramsey’s socks were donated by Ramsey resident Alyssa Jenkins, president of Jenkins Culinary Resources and a culinary school classmate of Verona resident Rosemary Citrano Gabbe. “It was Rosemary’s passion to make a difference,” Jenkins says. “When she told me that Verona High was playing Ramsey there wasn’t a second thought but ‘what can I do?’. Our high school administrators didn’t hesitate at all,” Jenkins added. “They will be spreading the word in Ramsey to inform everyone of what we are doing to support Verona and the young lives it has lost.”

The collaboration won’t end on the football field Saturday. The VEA will be a gold sponsor of the Montclair-Verona Out of the Darkness Walk that has been organized for Sunday, October 22 by Gabbe and her sisters in memory of their nephew Vanya Citrano, and Jenkins will be among the 349 people who have already raised more than $39,000 toward the walk’s $50,000 goal.

“The Verona Education Association, comprised of Verona school personnel, is grateful to have the opportunity to be a sponsor for the Montclair-Verona Out of the Darkness Walk,” says Thomas. “The association members are painfully aware of the increase in adolescent and adult anxiety and depression, which can sometimes lead to suicide. We were deeply saddened by the loss of two of our students in the past year. It is natural that we would do anything in our power to help the American Foundation for Suicide Prevention in their mission to decrease suicide.”

The football game kicks off Saturday, September 30, at 7 p.m. on the upper field at Verona High School. To register for the Montclair-Verona Out of the Darkness Walk, click here. The American Foundation for Suicide Prevention raises awareness, funds scientific research, and provides resources and aid to those affected by suicide. You can learn more about its mission here.