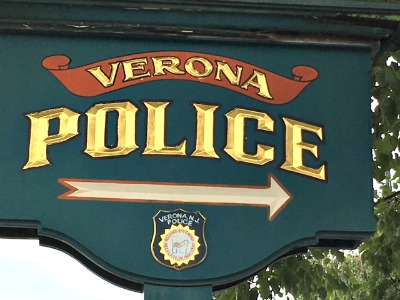 On September 3, 2017, Off. Mike Barone took a report from a Claremont Ave. resident who reported a suspicious van that had been seen traveling past his house on several occasions. According to the resident, he observed what he described as a newer white Sprinter type van with a male driver. The van had no markings on it, but the lower driver side did appear to be discolored due to previous damage. The operator of the van was described as being either a white or Hispanic male. The caller noticed this van driving slowly past his house approximately 4 times (all in the mid to late afternoon) since August 27th. He added that on one occasion he observed the male operator taking pictures of his house. A check of the area for the van was negative, and the resident was advised to contact the police should he see the van again.

On September 4, 2017, Lt. Robert Shafer was dispatched to the Verona Park on a report of a down runner. Upon arrival the Verona Rescue had already performed CPR on the victim who had gone into cardiac arrest after completing the UNICO Labor Day 5K run. Verona Rescue Squad member Susan DeWitt advised that one shock was administered and the victim had regained a pulse. The victim was transported to Mountainside Hospital by the Verona Rescue along with Atlantic Paramedic 7 for further care.

On September 6, 2017, Off. Brian McMahon was assigned to the 2300-0700 hour tour of duty in unmarked patrol car #2. At approximately 0003 hours, he observed a vehicle facing west on Bloomfield Avenue at the intersection with Pompton Avenue. After running a random check of the vehicle’s registration through his MDT, an “NCIC Alert” appeared on the MDT screen for a No-Bail wanted person from Newark Municipal Court. The name and information on the NCIC Alert appeared to match that of the registered owner of the vehicle. While dispatch was running a check of the registered owner, Off. McMahon followed the vehicle west on Bloomfield Avenue, then eventually into Caldwell College where the vehicle stopped and parked. After passing the vehicle the operator matched the image provided on the NCIC Alert on the MDT. Off. McMahon then spoke with the operator of the vehicle. After approaching the vehicle, the operator, later identified as Joshua I. Christian provided a New Jersey driver’s license. The driver’s license matched that of the registered owner. After confirming Joshua was a correct match of the NCIC Wanted Person, he was advised of the warrant and placed under arrest. After processing he was turned over to Newark Police.

On September 7, 2017, Off. Robert Juliano responded to a local gas station for a report of a dispute between an employee and a patron. Upon arrival, Off Juliano spoke with the gas attendant who stated that a female customer requested he fill her gas tank. When the tank was filled with 15.969 gallons of gas for a total purchase amount of $41.98, the female stated that she only asked for ten dollars worth of gas and did not intend to pay for the remaining balance. Off Juliano then spoke with the female who reported that she only asked the attendant for ten dollars worth of gas. The female only had ten dollars on her at the time and could not pay for the gas. The ten dollars was given to the attendant and both parties were advised of complaint procedures, and were informed that a police report would be generated documenting the matter. The female then left the scene.

On September 8, 2017, Off. Steven Young took a report of stolen checks. The victim reported she ordered checks for her Wells Fargo Bank checking account several weeks ago and never received the checks. The victim then noticed 2 checks were written from the checks that were never delivered, one in the amount of $498.00, and the other for $399.99. The victim contacted her banks fraud department who cancelled the checking account and replaced it with a new account.

On September 10, 2017, Off. Brendan Huber took a report of stolen checks. The victims stated that on August 31 she ordered four boxes of personal checks, but only received two of the boxes. On September 6th the bank contacted the victim and informed her that two checks were cashed against her account that appeared to be fraudulent: one for $398.98 and another for for $399.99 The victims stated that the a bank representative flagged the checks as fraudulent due to the different handwriting. The bank closed the victim’ account and refunded her new account for the full amount of the fraudulent checks. A Victim Notification form was completed and the victim was provided with an identity theft pamphlet. She was also advised to monitor her accounts and contact headquarters if she noticed any suspicious activity.

On September 11, 2017, Off. Giovanni DeSomma was dispatched to an Elmwood Road residence to take a report of a missing person. Upon arrival, Off. DeSomma met the caller who states his father walked out of his home sometime this morning and did not return. The caller advised he last saw his father at approximately 0800 hours. The caller stated when he returned home from work at approximately 1115 hours his father was was not home. While on scene the caller was contacted by a family member stating they located his father in the area of Bloomfield Avenue and Malvern Place. Off. DeSomma and the caller responded to the intersection of Bloomfield Ave. and Malvern Pl. where they located the caller’s father.

On September 12, 2017, Off. Christopher Scheper took a harassment report. The victim stated she dialed a phone number in error and the person on the other end began to yell at her. After disconnecting, the victim received numerous unwanted text and email messages from the number that she incorrectly dialed. Off. Scheper assisted the victim in blocking incoming calls and text messages from the number the victim dialed by mistake.

On September 13, 2017, Off. Stephanie Colon and Off. Justin Nielsen responded to the East Orange Police Department to take custody of Ms. Tahirah Washington for an outstanding Verona Municipal Warrant. Ms. Washington was placed under arrest and transported directly to the Essex County Correctional Facility, and turned over to the Essex County Correctional Facility staff.