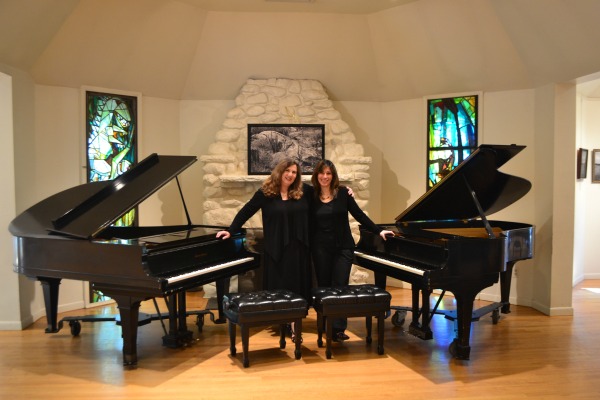 Double Take, a piano duo team comprised of pianists Jacqueline Schiller-Audi and Diane Battersby will perform a program of crowd pleasers for all ages on Sunday, September 24, at 3 p.m. on the Community Concert series at First Presbyterian Church of Verona.

Double Take has concertized throughout the New York Metropolitan area including performances at Lincoln Center, Steinway Hall and other venues. Battersby and Schiller-Audi have been a duo piano team since 2011 and enjoy bringing the two-piano repertoire to a variety of audiences.

Diane Battersby has performed in numerous solo recitals in the United States and Europe. As a winner of the 1992 Artists International Auditions, she was presented in a New York recital debut at Carnegie Hall’s Weill Recital Hall in 1993. Other New York City performances include Lincoln Center, Symphony Space, the 92nd Street Y, Steinway Hall, Trinity Church concert series and the American Landmark Festivals. Battersby has also performed as soloist with orchestras in the New York and Philadelphia areas.

As part of the Dame Myra Hess Memorial Concert Series, Battersby was broadcast live nationwide on National Public Radio. Battersby has also broadcast live on WBAI and WNYC Radio, and has been a featured artist on Chicago and New York television. She has recorded for Nonesuch records and has performed with the New Jersey Percussion Ensemble. She has traveled to Germany to perform solo recitals and a world premiere of a piano work written for her by a German composer. Battersby has performed at Moscow Conservatory’s Rachmaninov Hall and at the Salle Cortot in Paris. She has served on the faculty of both William Paterson University and Montclair State University.

Jacqueline Schiller-Audi is a graduate of the Juilliard School where she was a student of Peter Serkin. Also a graduate of the Mannes College of Music, she has performed extensively throughout the New York Metropolitan area as a soloist and chamber musician. Jackie has collaborated with musicians from the New York Philharmonic in their chamber music series at Merkin Hall, the Bruno Walter Auditorium, the Soho Guggenheim, the Roerich Museum, and the Donnell Library in NYC.

Schiller-Audi has participated in the summer music festivals of Aspen, Tanglewood, and Musicisti Americani in Sulmona, Italy. She also performed a solo recital at St.Martin in the Fields in London. She was guest soloist with the Martinu Philharmonic at Carnegie Hall in a performance of the Martinu Double concerto for piano, timpani and two string orchestras. This concert was subsequently recorded and released on Elysium records. Other solo performances include appearances with the Virtuosi da Camera, the Adelphi chamber orchestra, the Hoboken Chamber Orchestra, the Wayne Chamber Orchestra, the North Jersey Symphony, the North Jersey Philharmonic, the Metropolitan Orchestra and the Julius Grossman Chamber Orchestra.

You won’t want to miss these exciting pianists perform on two grand pianos. A donation of $10 is suggested.