Facebook
Twitter
Pinterest
WhatsApp
- Advertisement -
It’s Flag Day nationwide today, but that had a bit more meaning in Verona, where a flag-raising ceremony at Annin Flag also finally signaled the start of the building’s conversion to residential lofts.

“It’s been worth the wait,” said Ed Russo, CEO of Russo Development. The Carlstadt-based company and partner Dinallo Construction unveiled plans for the conversion two years ago. Their company, D&R Verona, will also construct a second loft building on the site to mirror the nearly 100-year-old Annin Building, creating 112 studio, one-bedroom and two-bedroom units in all. Russo said he hopes the buildings will be ready for occupancy in a year.

“Verona took the time to make sure we had the tools to make this project a success,” Russo added. Verona declared the flag building and surrounding properties an “area in need of redevelopment” and changed the tax structure to a PILOT, or payment-in-lieu-of-taxes in March. Under a PILOT, Verona’s municipal government keeps 95% of the revenue that would have been paid as taxes on the improvements to the site, instead of sharing them with the Board of Education. “Verona’s professionals were very accommodating, but they weren’t pushovers,” Russo said.

Verona’s mayor, Kevin Ryan, returned the compliments. “We got a sense from the beginning that this developer was listening,” he said. “We are excited to have them here.”

The ceremony seemed both momentous and bittersweet for the Beard family, the descendants of Annin founders Edward and Benjamin Annin. Flag Day is traditionally the day for the company’s annual picnics and service award ceremonies, which are held at its headquarters in Roseland and all of its plants. Carter Beard, Annin Flagmaker’s president, told the crowd that he got his first job in the Verona factory at age 14, painting the stairwell to the basement. He later graduated to sewing machine mechanic under the watchful eye of Joe Vallone, who served as plant engineer until the factory closed in 2013. Vallone, who was also in attendance, recalled that the factory once had workers from 38 different nations among its employees. “I put flags representing each one in the lobby,” he said.

After the Verona building stopped being used for manufacturing, Annin’s management had briefly contemplated renovating the building itself. “But we decided that we should stick to making flags,” said Beard, “and get a professional to redevelop the building. These are,” he added gesturing to D&R’s principals, “the best people to do it right.”

The Annin name will remain on the original building, and there might still be a bit of Annin on the inside, too. Bob Caggiano, Annin’s vice president of commercial sales (and a 40-year company veteran), confessed that he’s been looking at D&R’s drawings as he contemplates retirement. Said Caggiano, “I want to get one of these apartments.” 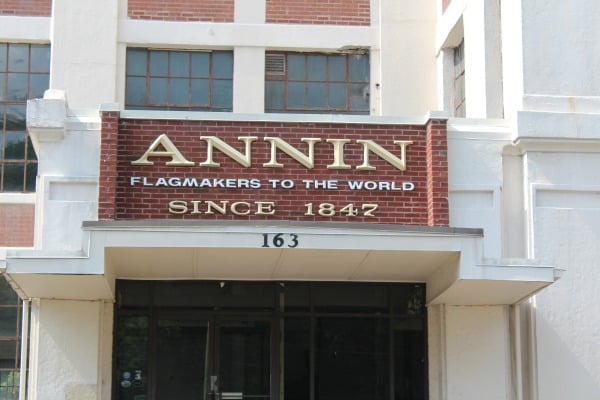