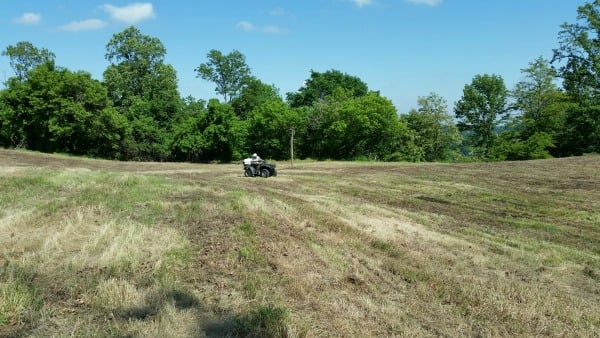 The small meadow at the southern end of Verona’s Hilltop Reservation doesn’t look like much right now. But the mere fact that it exists at all is something of a miracle.

More than 100 years ago, the western ridge where the Hilltop park is located was meadow and woodland. Then the trees were chopped and the meadows were paved so Essex County could build a sprawling tuberculosis sanatorium there. After modern medicine developed drugs that eliminated the need to isolate tuberculosis patients, Essex County began to raze the Hilltop buildings in 1993, but returning the site to its former natural glory wasn’t on the agenda. And so the meadow sat, until 2006, when the Hilltop Conservancy began to clear it and the surrounding area.

The small meadow had been the site of the sanatorium’s power plant, laundry, male staff residence and two equipment garages. (To limit the spread of tuberculosis, the sanatorium was a self-contained village that produced its own food and power, and housed all its workers.) The buildings had been demolished but little of the demolition rubble had actually been removed; the paved roads and parking lot were still covered in asphalt. It was all too expensive for the Conservancy to remove, so it had to get creative, punching holes in the pavement to let rain flow through to the soil underneath. Theresa Trapp, the Conservancy’s treasurer, nurtured tree and shrub seedlings at her home until they were big enough to plant after volunteers dug through rubble to make room for their roots.

The Conservancy’s creative restoration got an unexpected boost from the 2011 Halloween snowstorm. The heavy snow had landed on trees that hadn’t yet lost their leaves and many toppled under its weight. Verona’s Department of Public Works hauled the trees to a giant mulching machine parked in the lot at the Verona Pool. The Conservancy invited DPW to haul what the machine generated to the Hilltop and deposit it all over the meadow. DPW, Grove Landscaping and Conservancy volunteers helped spread and smooth the chipped trees, saving the township about $200,000 in disposal costs. As the mulch decayed over the ensuing years, it created a foundation for the re-planting of the native grasses and wildflowers that once covered the area.

“We didn’t finish site clearing until last winter” says Trapp, “some of which involved finding and filling open storm drains.” At one point, Trapp found herself  chest-deep inside a storm drain, pulling up an old Electrolux vacuum cleaner from the bottom.

On May 31, the Conservancy brought in the New Jersey Division of Fish & Wildlife, which spread native seeds all over the area: Purple Prairie Clover, Tickseed, Lance-leaf Coreopsis, Oxeye Daisy, Big and Little Bluestem, Indiangrass, Switchgrass and Broomsedge. The Conservancy, which is a registered nonprofit, used membership dues and small donations to purchase the wildflower seed.

Now, it’s again Mother Nature’s turn to help, with rain and sun to make all the new plantings grow. The Conservancy’s next project will be a corporate volunteer event this month to create a wood chip path around the site to improve public access but also to keep visitors off of the newly seeded area. A bigger, longer term project is to work with Essex County to follow through on the Hilltop Reservation’s master plan, and finish removing what Trapp calls the sanatorium “leftovers”. “We got a lot done last winter and this spring”, she says, “but there are some items remaining.”

You can hike and bike the Hilltop trails by parking near the big green water tower above Freedom and Liberty fields, or behind the Highlands at Hilltop apartments. To learn more about the Conservancy and join in its efforts, see its website.