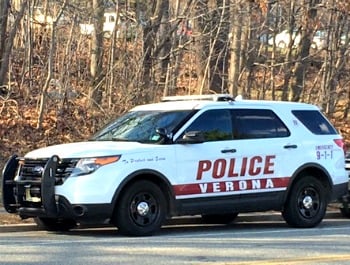 The Verona Police Department logged a total of 370 assignments during the week of May 21– May 27, 2017. Responses included the following:

May 21, 2017
6:00 PM: Officers Thomas Conroy and Chris Scheper conducted a motor vehicle stop on Montrose Avenue for an observed violation. While speaking with the operator, the officer detected an odor of marijuana coming from the vehicle, also observing several cigars scattered throughout the vehicle. The operator was asked to step from the vehicle and was advised that the vehicle was going to be searched. Upon searching the vehicle, officers located a bottle containing a green leafy substance as well as several open containers of alcohol. The operator, Erin Spain of New York, was placed under arrest and transported to police headquarters. After processing, Spain was issued several summons and released.
7:27 PM: Officer Stephanie Colon took a report of a dispute from a Brookside Terrace resident. The resident reported that while in the front of his residence speaking to a friend, a neighbor passed by and began to yell profanities regarding the way the friend was parked. The resident was concerned as there were several children in the area who heard the yelling. The resident also reported that there have been previous incidents with this neighbor.

May 22, 2017
3:48 PM: Officer Chris Scheper took a report of a fraud from a Burdett Court resident. The resident reported that her debit card was declined for a purchase and when she checked her account she discovered numerous fraudulent transactions. The resident further advised that she had ordered new checks but they were never delivered. The resident has been in touch with her bank and the account has been closed.
6:28 PM: Officer Alyssa Kirby took a report of a simple assault from a Pompton Avenue business. The manager reported that a message was received on the business voice male from a young male who threatened the business. The manager stated that she attempted to call the number, however, each time the phone was picked up the call ended. The officer attempted to call the number but there was no answer.
9:39 PM: Officer Brian McMahon conducted a motor vehicle stop on Bloomfield Avenue after a random check of the license plate indicated that the owner’s license was suspended. Upon speaking with the operator the officer detected an odor of marijuana coming from the vehicle. The operator was asked to step from the vehicle and was advised that the vehicle was going to be searched. While searching the vehicle, the officer located CDS and drug paraphernalia. The operator, Xiang Chi of Montclair, was placed under arrest and transported to police headquarters. After processing, he was issued several summonses and released.

May 23, 2017
12:58 PM: D/Sgt Tim Banta took a report of a larceny at Brookdale Avenue School. School personnel reported that several pieces of electronic equipment that was stored at the school were discovered missing. The value of the items is approximately $6000.

May 24, 2017
2:01 PM: Officer Ed Ruff took a report of a fraud from a Bloomfield Avenue business. The accountant at the business reported that an employee had lost a paycheck in September of 2016. The employee was issued a new check and the lost check was cancelled. On May 22 the business was advised that the lost check was cashed at an unknown location. The check had the original employee’s signature as well as that of another individual. The accountant reported the second signature is that of an employee that had been fired two weeks ago.
3:12 PM: Officer Steve Young took a report of construction material falling onto a vehicle at the intersection of Grove Avenue and Bloomfield Avenue. The vehicle owner reported that there was no damage to her vehicle, which had been struck by a large piece of foam that fell onto her vehicle. The officer spoke to the construction foreman and advised him that the job was being shut down as he work site was not safe. The building inspector was notified and will follow up with the property owner.
6:10 PM: Officer Thomas Conroy took a report of a fraud from a Wedgewood Drive resident. The resident reported that her bank had previously notified her that an unknown person had made two purchases using her debit card. She stated that several days ago she received a letter from Chase Bank advising her that an application to open a checking account was made using her personal information. The account was flagged by the fraud department and was never opened.
7:31 PM: Officer Thomas Conroy responded to the area of Lakeside Avenue to assist the West Orange Police Department in locating a vehicle involved in a hit and run accident. The officer located the vehicle parked along the curb on Lakeside Avenue with heavy damage on the vehicle. Upon speaking with the operator, the officer observed that her eyes were bloodshot and watering and that her movements were very slow and clumsy. Her speech was also slow and slurred. The officer requested the operator step from the vehicle to perform field sobriety tests. After the tests, the operator, Eva Hakoun of West Orange, was placed under arrest and transported to police headquarters. After processing, Hakoun was placed in the holding cell as she was unable to contact someone to pick her up.
10:05 PM: Officer Justin Nielsen conducted a check of a vehicle parked in a vacant parking lot on Fairview Avenue. Upon approaching the vehicle and speaking with the operator, the officer detected an odor of marijuana coming form the vehicle. The operator was asked to step from the vehicle and was advised that the vehicle was going to be searched. Upon searching the vehicle, the officer located CDS and drug paraphernalia. The operator, Olivia Feiger of Belleville, was placed under arrest and transported to police headquarters. After processing, she was issued several summonses and released.

May 25, 2017
9:42 PM: Officer Justin Nielsen took a report of a dispute at a Bloomfield Avenue business. The officer spoke to a female who reported her son had been suspended from school and had come to the prom to take pictures outside of the building with his friends. The student’s father had come to take him home as he felt he did not deserve to be at the prom due to the suspension. The son who is an adult, refused to leave with his father and an argument ensued. The student left the area with his mother. and all parties were advised to keep the peace.

May 26, 2017
4:28 PM: Officer Brian McMahon took a report of a fraud from a White Rock Road resident. The resident reported that there were several unauthorized charges made to her Citibank credit card. She stated she also received a notification from her Capital One Credit Card about a suspected fraudulent charge. Both accounts have been closed.
6:18 PM: Sgt John Lecreux took a report of a larceny from a Claridge Drive resident. The resident reported that her wallet was taken while she was in the checkout line at a Pilgrim Plaza business. Store video revealed a white female suspect with long blond hair wearing a pink baseball cap, navy shirt, blue pants carrying a large black purse. The resident was provided with identity theft information.

May 27, 2017
1:03 AM: Officer Robert Maguire conducted a motor vehicle stop on Bloomfield Avenue for an observed violation. Upon checking the operator’s credentials, active warrants from the Newark Municipal Court were located. The operator, Johnny Martinez of Bloomfield, was placed under arrest and transported to police headquarters. After processing Martinez posted bail and was released.
8:55 PM: Officer Thomas Conroy responded to Derwent Avenue on a report of a possible house party. Upon arrival, numerous juveniles were observed running from the area. Upon checking the house for any additional juveniles, the officer observed numerous open and unopened alcoholic beverages throughout the house. The homeowners were contacted and responded to the scene. The homeowner was advised that the incident would be turned over to the juvenile detective for follow up.