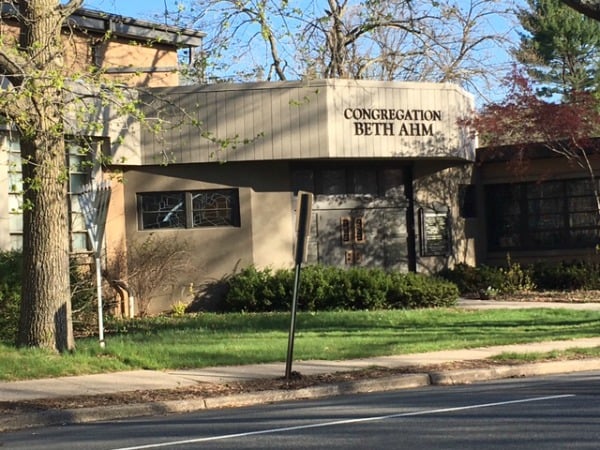 The Verona Town Council voted unanimously at its Monday, May 1 meeting to purchase 56 Grove Avenue, the property that has been the longtime home of Verona’s only synagogue, Congregation Beth Ahm. The purchase price was $900,000, below the $1 million asking price that the synagogue had set on the building when it listed it in January. The Town Council also approved a bond ordinance of $942,500 that may be used to fund the acquisition, depending on its eventual usage and the disposal of other town-owned real estate. The township manager outlined three potential uses of the property, including it becoming he new home of the Verona Rescue Squad, but the Council did not commit to a definite usage.

At the meeting, Township Manager Matt Cavallo presented a 26-page PowerPoint about how the township researched and prepared the acquisition, refuted rumors about the intended usage of the property and rebutted assertions that the township could have been more transparent. “The purchase of real property is a contract negotiation that until a deal has been reached cannot be disclosed as it could have a possibility of jeopardizing pending negotiations before a deal has been struck,” Cavallo said.

Cavallo indicated in his presentation that there are two main potential uses of the property, for the Rescue Squad or for subdivision into single family lots that would be sold to a developer. Cavallo indicated that if the Rescue Squad did move its headquarters to 56 Grove, its current property at Church Street would be deeded to the township, which would then sell it, putting it back on the tax rolls. He also noted, that if the property were to be sold to another house of worship, it could exacerbate parking problems in the area, particularly if the new congregation had Sunday worship. There is a Jehovah’s Witness congregation on Personette Avenue and the Episcopal Church of the Holy Spirit on Gould Street.

Cavallo’s presentation was followed by more than an hour of questions from the public. Several of the residents who spoke were worried about the potential impact of the Rescue Squad’s relocation on their property values. (Depressed property values was also raised as a concern by some homeowners around the Verona High School field during the debate over renovating that property, but the nine Dodd Terrace homes that have been sold since the field referendum passed were all sold for more than their assessed value.)

Other speakers, like Sal Calandra and Denise Bastanza, expressed concern over traffic safety if the Rescue Squad comes to the neighborhood, which includes both H.B. Whitehorne Middle School and nearby F.B. Brown Elementary school. But Rescue Squad Captain Frederick Tempesta told the audience that the Rescue Squad regularly responds to calls around–and in–all of Verona’s schools and holds safe driving paramount. “My drivers are exceptionally well trained,” he said. “We are one of the better trained volunteer agencies in north Jersey.” Tempesta stressed that, as an all-volunteer unit, the Rescue Squad saves Verona taxpayers millions of dollars each year.

After the Council unanimously approved the purchase agreement, it moved on to the bond ordinance. No one in the audience raised questions during the public comment portion of that review, and it too was passed unanimously.

You can watch the entire meeting in the video window above, or by clicking here.