Softball Off To A Start That’s Anything But Soft 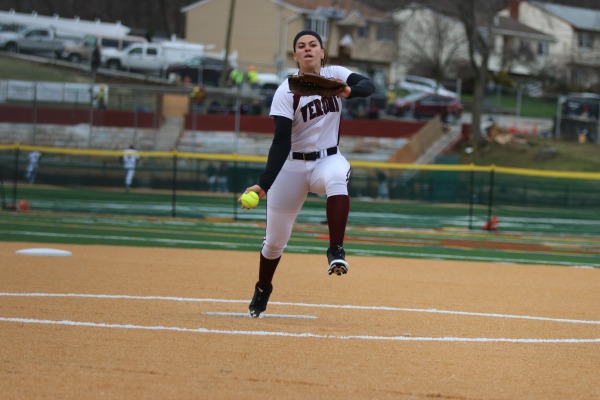 Whatever the reason, the Verona High School softball team is off to its best season in recent years, with a 5-0 record overall and a 3-0 record in conference. The team has three shutouts to its credit already, including a 1-0 season opener against Columbia High School, a 5-0 defeat of Millburn High School and a 15-zip shutout of Newark East Side that saw every player put something on the scoreboard. The Lady Hillbillies now sit atop the Super Essex Conference’s Liberty Division and their coach, Angela Salisbury, couldn’t be prouder.

“They all have a lot of timely hits,” she says of her team.

This year, VHS softball is playing on a new venue, the newly turfed Doc Goeltz Field below Verona High School, and Salisbury belives that having a field that was playable early has been a big help. “When we played Columbia, they had had only three scrimmages and we had had 10,” she says.

Before the girls took to their new field, they once again went to Florida for five games at the ESPN Wide World of Sports. But unlike last year, when they came home with no wins, the team returned to Verona with three victories. “We played all New Jersey teams,” says Salisbury, “really good teams.”

This year’s Verona team has strength on the field, at bat and on the mound. Christina Colon, a sophomore, is the headliner, with Renata Primmer, a junior, getting innings against West Orange and Newark East Side. (Verona’s third pitcher, Kristen Selby, is coming off an injury). Colon has only 10 hits against her in her first four starts, including a no hitter against Columbia. Colon and Primmer are threats at bat too, with Colon having five RBIs last week and Primmer delivering six hits, five RBIs and five runs scored in 18 at bats.

Verona will face its biggest challenge yet on Thursday, when the Hillbillies travel to Bloomfield for a 4 p.m. game against Bloomfield High School, which is new to their conference but not an unfamiliar opponent: Bloomfield beat Verona two  years in a row in the SEC tournament. On Saturday morning, VHS will be at Wayne Valley High School for a two-game tournament that is raising money to fight pediatric cancer. Verona’s next home game will be Tuesday, April 18 against Hudson Catholic.