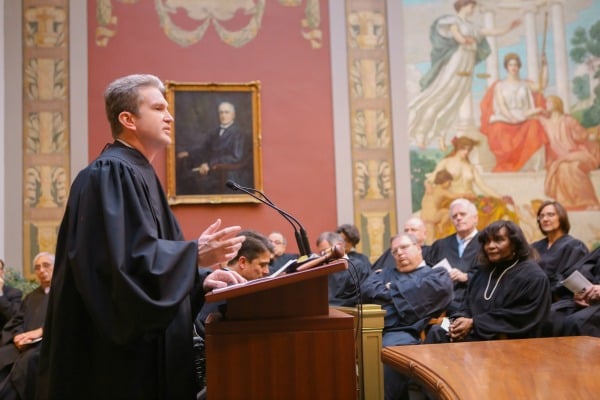 Verona native Christopher S. Romanyshyn, a graduate of the Verona High School class of 1988, took the oath of office on Friday March 10 to serve as a Superior Court judge in Essex County. He has been assigned to the Essex County Family Division.

Judge Romanyshyn was an assistant attorney general and deputy director with the New Jersey Division of Criminal Justice from May 2013 to December 2016. He had joined the division in January 1999 and served as a deputy attorney general in the Labor Prosecutions Bureau for one year and, for 13 years, in the Gangs & Organized Crime Bureau, where he also served as deputy chief and chief of that unit.

Prior to joining the division, Judge Romanyshyn practiced civil litigation with the law firm of Keenan, Powers & Andrews, P.C. in New York City and Morristown from 1995 through 1998, specializing in insurance defense litigation.

Romanyshyn holds a B.A. degree in history with a second major in political science from Fairfield University in Fairfield, Conn., and a juris doctor from Seton Hall University School of Law. He is admitted to the bar in New Jersey, New York, and the District of Columbia.

In Superior Court, Romanyshyn will hear domestic violence cases as well as cases involving child support, custody and visitation rights among people who have children in common but are not married. He credits Verona resident Scott Chesney for encouraging and assisting him as he explored the judgeship opportunity and Senator Kevin O’Toole of Cedar Grove for sponsoring his nomination in the Senate.

Romanyshyn was one of nine attorneys nominated by Gov. Christie for state judgeships across five counties, which should help to alleviate the backlog of cases statewide. There are now 59 judges in Essex County, including five retired judges who are available and two tax court judges. To meet an expanded case load expected from the reforms enacted last year to New Jersey’s bail laws, New Jersey is expected to add 20 more judges statewide this year.