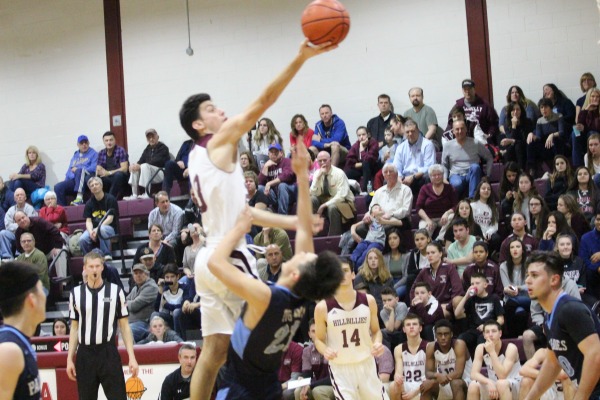 Verona faced off against the Tigers of Palisades Park in the first round of the North 1, Group 1 sectional tournament on Tuesday night. Both Hillbilly teams easily pulled out wins: the boys basketball team ran up a 70-40 final score, while the girls basketball team delivered a 53-24 win.

The Verona boys team had a huge height advantage in the paint, allowing the guards to pound it inside to the forwards for buckets right under the basket. The Hillbillies also dominated Palisades Park in the rebounding department which gave them several opportunities for second chance points. Because Verona was able to get to the hole so often, it set them up for many chances at the free throw line where they went 17 for 23. On the defensive side, Verona’s height advantage forced the Tigers to take unbalanced shots. The Hillbillies held Palisades Park to only 16 points in the first half and seven points in the third quarter. Zack Zaccone led scoring for the Verona boys team with 12, followed by Rob Sorhaindo (video below) with nine, while Travis Jocelyn and Joe Zecchino both had eight.

[ngg_images source=”galleries” container_ids=”280″ display_type=”photocrati-nextgen_pro_masonry” size=”180″ padding=”10″ ngg_triggers_display=”always” captions_enabled=”0″ captions_display_sharing=”1″ captions_display_title=”1″ captions_display_description=”1″ captions_animation=”slideup” order_by=”sortorder” order_direction=”ASC” returns=”included” maximum_entity_count=”500″]The scenario was much the same for the Verona girls, who dominated from the opening whistle. The score was 25-7 at the half and it was only in the fourth that Palisades Park outscored Verona–and it was only by two points. Kylee Gallagher was the high-scorer for the Lady Hillbillies with 11 points, followed by Cecila Courter and Desiree Meyer with 10 points apiece and Brianna Horton with nine points.

The Hillbilly boys, the number 1 seed, will face the winner of Tuesday night’s Wood-Ridge/West Caldwell Tech game on Thursday, March 2, at 6 p.m. The Hillbilly girls, who are the number 3 seed, will take on Saddle Brook that same dat at 4 p.m. Both games will be played at VHS.