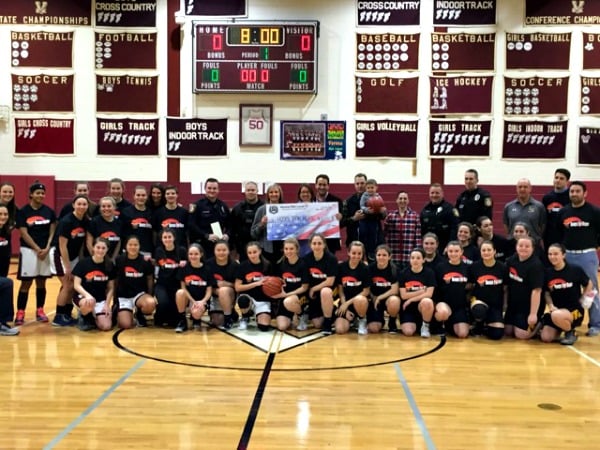 The girls basketball teams of Verona and Cedar Grove high schools came together on Friday night for a game that produced a big win–for brain cancer research.

The Hoops for Hope fundraiser was initiated last year by a Cedar Grove player, Elyse Fearon, in honor of her father Bill who was fighting brain cancer. Money raised was donated to Hackensack University Medical Center’s John Theurer Cancer Center for brain cancer research and accepted by the team from HUMC in charge of his treatment. (Lt. Fearon, a New Jersey State policeman served at the World Trade Center complex in the the aftermath of the 9/11 terrorist attacks, passed away on Dec. 28, 2016.)

The hope then was that Verona would host the fundraiser this year. It did, and honored a VHS graduate who is fighting her own battle with brain cancer with help from the same team at HUMC.

Melissa DiStefano graduated from VHS in 1996. In 2013 she was working as a neonatal nurse and was nine weeks pregnant when she suddenly had a seizure and was diagnosed with brain cancer. DiStefano continued her pregnancy, delivered six weeks prematurely, and underwent brain surgery three weeks later. Although she is unable to continue nursing, she is well enough to care for her son, Brayden, who is a healthy, very active three year old.

Thanks to the cause–and the local rivalry–the game attracted a crowd and they were generous, raising $2,600 for HUMC, including a $500 donation from Verona PBA Local 72. Several staff members from hospital were in attendance to accept the generous donations. DiStefano’s son was presented with a basketball signed by both the Verona and Cedar Grove teams. (Verona narrowly defeated Cedar Grove 32-26 in the game.)

“We are certainly grateful to the PBA,” said DiStefano’s mother Patricia DiStefano, “and to everyone who contributed.”