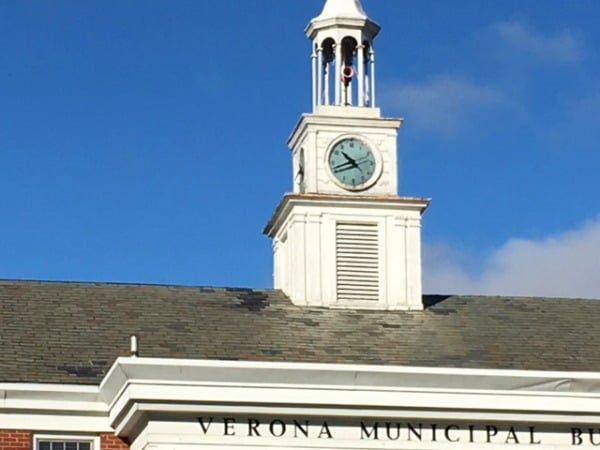 It’s baaack: The emergency horn that sits atop Town Hall is once again being used to summon Verona’s volunteer first responders to trouble.

For decades, Verona had used an air horn to issue calls for the Verona Fire Department and Verona Rescue Squad. The original emergency alert system was based on Verona’s grid-like map. Each corner of town was assigned a number, which for VFD calls would lead off a string of what could be up to a dozen horn blasts so that firemen could walk or drive immediately where they were needed. The horn was naturally amplified by Verona’s hills-and-valley topography.

Over the years, technology was added to the horn alerts. Every Fire Department and Rescue Squad volunteer was issued a two-way radio and information was also sent out to cell phones by text message. In 2014, the horn blasts were changed to a simple 3-1-3 to let first responders know that they were needed, with the radios and text messages providing more information on the call. Then, about a year ago, when the police dispatch service was temporarily relocated from Town Hall so the room could be modernized, the horn had to be silenced. And as the silence continued, our first responders discovered a problem: They were missing calls.

“Guys who were at the pool or in the shower didn’t hear their phones,” says Pat PcEvoy, an active VFD member and one of the assistant Office of Emergency Management directors in Verona. “Guys in church had their radios shut off. Guys who were available in town were missing calls and that put those of us at the scene at tremendous disadvantage.” McEvoy stresses that this never put any person or any property in jeopardy. “It just put the burden on a few guys when many were needed,” he adds.

So McEvoy, who is both a former VFD chief and a former Rescue Squad chief with 40 years of first responder service to Verona, began looking into the problem. He told the Town Council last September that every town across the country that had shut off its horn had had similar problems of missed calls. (You can watch his presentation in the video below.) The VFD, which had never been in favor of turning off the horn, asked for it to be reinstated, as did the Rescue Squad.

According to Township Manager Matt Cavallo, Verona spent $14,000 to get the horn back in operation because its compressor and air storage tank both needed to be replaced. Beginning this morning, the horn will now sound two rounds of three blasts for the Verona Rescue Squad and two rounds of 2-1-2 blasts for the Verona Fire Department. The horn will be used only from 8 a.m. to 8 p.m., which should lessen the discomfort to Verona ears.

“I empathize with people about the sound,” says McEvoy. “I lived three blocks from the horn for 17 years.” But he believes that the horn’s benefits significantly outweigh its loudness. “It was a way for the entire community to know that there was a situation and that the Fire Department and Rescue Squad were all volunteer,” he says. It was also, he quips, a way for his wife to know that, if he went to the grocery store and didn’t come back for a while, it was because the horn had summoned him to a call.

The restored horn also isn’t Verona’s only audible alert. In 2011, the town installed a second air horn system to let people at the Verona Pool and the Verona Community Center fields that there is a threat of a lightning strike.

“I understand that some people don’t like the horn,” McEvoy says, “but we are doing this for the betterment of the town.”