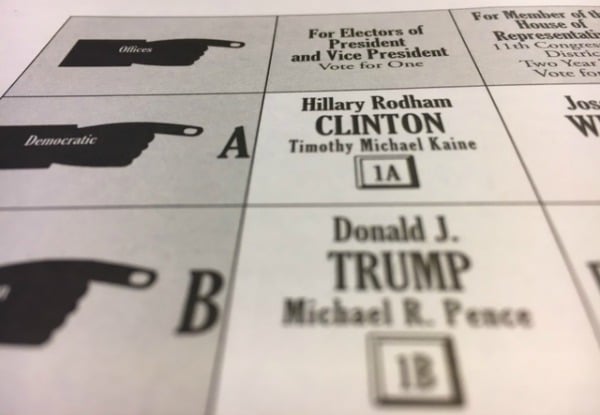 Many young people in Verona turned out to vote in last week’s presidential election, but 30 of them–some not even old enough to vote yet–got an unforgettable close-up of history. They were the inaugural group of a poll worker/poll greeter program arranged by Verona’s municipal clerk to get more young people involved in elections.

“I really never thought about voting this way before,” said Michael Shamouil, a Verona High School junior who served as a poll worker at H.B. Whitehorne last Tuesday afternoon. “What I really found fascinating is that there was a long line but no one complained. They wanted to vote to voice their opinion.”

Students could participate in the election as either greeters who welcomed voters as they arrived at the polling places, or as a full-fledged election board worker, the people who help voters to sign in and collect the voting tickets. To be the latter, Shamouil had to squeeze a two-hour training session in West Orange in between studying for five high-pressure Advanced Placement classes, including AP Chemistry. “I don’t think of myself as a political person,” said Shamouil, “but I watched all the debates and I stayed up until 12:30 a.m. on election night to see what was happening.”

The students saw their work as useful. “I don’t know how anything could get done without the districts being sorted,” said Steve Bass, a senior who worked as a greeter at HBW, helping voters to find the right place to sign in. “A vast majority of people didn’t know their district, or even what a district was.”

The student workers got $100 for their half day of poll service, but that seemed beside the point for some. “I worked at the polls to learn more about the election process and be active in my community,” said Adam Kazanfer, a junior at VHS who is taking AP U.S. History II. “Working at the polls gave me an opportunity to be part of a historical election, even though I am not old enough to vote.” Dean Ramsthaler, a junior who takes AP US History and has an interest in politics, echoed those thoughts. “Working at the polls is a great experience that gives you an understanding of how voting works,” he said.

For most of the students, the program was their only chance to participate in an historic vote. “I decided to be a greeter because I am fairly interested in politics, but would not have been able to vote in this election because I’m 17,” said Anna Shea, a senior who was assigned to District 1, which was having its first presidential vote in its new polling place, Claridge II. “The polls were pretty quiet where I was volunteering, but it was interesting to see how people were reacting quite calmly to such a crazy election.” District I had been moved to the Claridge from Laning to increase voter turnout, but the district wound up having the lowest turnout of any Verona district.

Whether they were greeters or poll workers, the students had to make sure that every voter followed the rules, which made for some awkward moments. Mia Corbett, a who missed being able to vote because her 18th birthday fell in late November, saw one of her friends show up at the Forest Avenue polling station wearing a baseball cap with one candidate’s election slogan. It fell to Corbett to explain that that was prohibited electioneering. “She really didn’t understand why she couldn’t wear it,” Corbett said. “She was very reluctant about taking it off.”

The students are ready for their next election assignment, which could come at Verona’s municipal elections next spring. While Essex County paid for the workers at the November election, Verona’s town council would have to shoulder the extra costs for a municipal vote. Thirty students worked the November election, and many more had to be turned away because Verona only has 11 polling places.

“I wish,” said Corbett, “that everyone in my Gov class could have done it.”