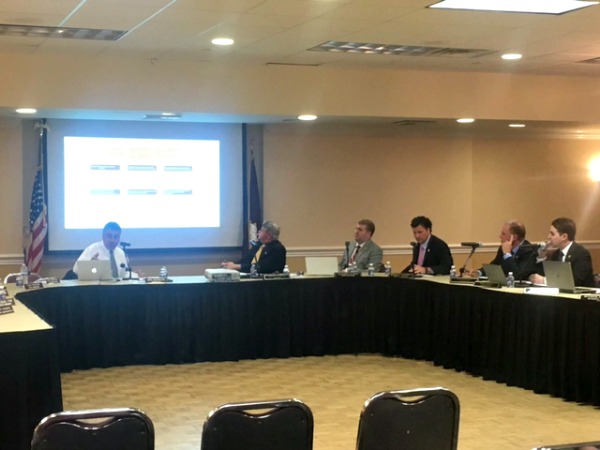 What a difference four years make.

In June 2012, Verona’s Board of Education and Town Council held a joint meeting to talk about what each was doing for the other–and the townspeople they serve. It was cordial, but tense, and the years that followed saw open expressions of dissatisfaction by one body for the other, and no follow-up meetings.

On Tuesday, the BOE and Council held a new joint session, and, before the opening gavel there were more hugs and back-slapping than at a high school reunion. Each side started with a recap of what they’ve been up to since the last confab (you can catch up on the BOE starting here and the Town Council here).

And then we got to the real meat of the change that has occurred between the two bodies. Over the last decade, Verona’s municipal government has expanded the number of properties covered by a payment-in-lieu-of-taxes, more commonly known as a PILOT agreement. The PILOTs keep more revenue in town than traditional property taxes: Only 5% of the improved value goes to Essex County coffers under a PILOT, while 20% of property taxes go to the county. But while more PILOT money stays in Verona, there have been concerns that these arrangements could shortchange Verona’s public schools. The schools get 55% of normal property tax revenues, but they get a big fat zero from improvements under PILOTs (the BOE still gets its normal share of the land tax). Verona’s previous town manager, Joe Martin, was adamantly opposed to sharing any PILOT revenue with the schools. He believed that the town did so much of behalf of the schools without charge that the town had no obligation to share what would be a substantial revenue stream from the PILOTs.

On Tuesday, the BOE and the Town Council acknowledged that they both performed services for the public school-aged children of Verona. And they committed to working together for the public good going forward. After new Town Manager Matthew Cavallo said that the township would be using its computer-based phone network to support emergency telephones on its new fields behind the Verona Community Center, BOE President John Quattrocchi asked whether the schools could piggyback on that contract because they use the same telecom technology. Cavallo promised to get the ball rolling.

And then Cavallo turned the discussion to the PILOT agreements. The Hilltop apartment complex is the biggest PILOT now, generating perhaps as much as $700,000 in revenue for Verona this year. The two small Verona Place apartment buildings are also covered by a PILOT that will begin making payments next year, and the redevelopment of the former Annin flag property could produce PILOT revenue starting in 2018.

Some of these revenue streams will be needed to pay off the debt incurred to build the youth sports complex at Freedom and Liberty Fields. Township CFO Matthew Laracy said Wednesday that while the town needs less than $100,000 a year for the field debt service now since they are still covered by short-term notes, those needs will rise to $500,000 a year or more when the town converts the notes to long-term debt. The town faces other costs, too: Mayor Kevin Ryan noted that the firehouse by Everett Field needs to be replaced and that, despite the ground-floor improvements at the Verona Public Library, a substantial amount of work remains to be done upstairs. If the town were to share PILOT money with the BOE, Cavallo asked, what would it be spent on?

BOE President John Quattrocchi said that the PILOT money would not be spent on things that are the primary responsibilities of the BOE’s budget, “nothing that would be in the normal course of educating students.” Instead, the Board would put the PILOT money into a facilities reserve fund, which could spare the BOE–and Verona’s taxpayers–from another referendum for building improvements, like the $13.8 million measure approved by voters in 2014.

How soon PILOT-sharing will happen, and what the total amount to be shared will be, is anybody’s guess at the moment. Mayor Ryan seemed to be in favor of it, as did Deputy Mayor Michael Nochimson and Councilman Alex Roman. “We need to put some proposals on the table and figure out what’s best for all taxpayers,” Roman said. Councilman Bob Manley acknowledged the “symbiotic relationship” between the BOE and the Town Council, but expressed concern over “handing over” PILOT money. (Councilman Jay Sniatkowski and BOE member Jim Day were absent from the meeting.)

You can watch the meeting in full below. FYI, both sides also committed to holding joint meetings more frequently in the future.