On September 20, the Environmental Working Group, a national advocacy organization, released an analysis of federal data on nationwide drinking water tests that indicated that the drinking water for more than 200 million Americans was contaminated by chromium-6. Verona’s water quality was in the report, prompting the municipal government to issue a statement about our water quality. To understand the EWG report and Verona’s statement, however, you need a bit of background.

Chromium-6, also known as hexavalent chromium, is a carcinogenic chemical made famous by the movie Erin Brockovich. California, where the events in the movie took place, issued a strict public health goal for the amount of chromium-6 allowed in drinking water. But that doesn’t have the force of a law and the EWG says, in introducing its report, that federal regulations have been stalled by challenge from the chemical industry. 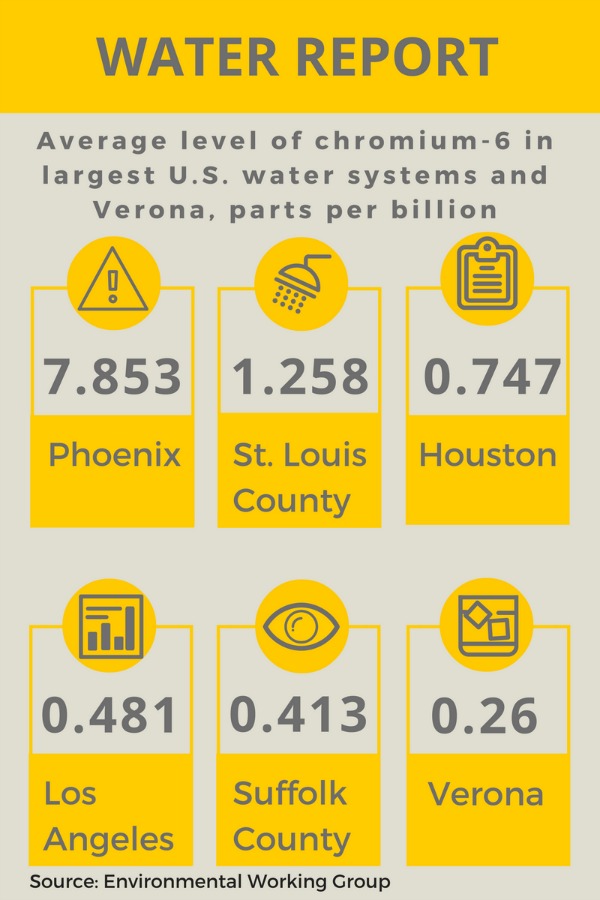 According to the federal data underlying the EWG report, Verona has an average of 0.26 parts per billion of chromium in its water supply. That’s more than California’s Public Health Goal (0.02 ppb) but far less than many other cities and towns, including towns in Essex County. The top town in our area is Livingston, with 0.87 ppb, and the lowest is Belleville, where the average matched the California standard. Phoenix had the highest concentration nationwide, at 7.853.

“The Township of Verona Water Department shares the EWG’s concern for water quality and public health protection,” the town said in a statement issued Friday. “Water utilities currently monitor for ‘total’ chromium, of which hexavalent chromium is a component. Most public water utilities, including Verona, are in compliance with the existing standard.” The most recent Verona water quality report is here.

The report is the latest challenge for clean water in Verona. In May 2016, the public schools had to replace and remediate water fountains in several schools after testing showed a higher level of lead than is allowed by the U.S. Environmental Protection Agency. In March 2015, Verona had to temporarily shut down one of its two wells after regular testing showed that the level of arsenic in it was above the New Jersey state standard. Verona pumps water from its wells into holding tanks located on the town’s eastern and western ridges where it is mixed with water from the Passaic Valley Water Commission before being pumped out to homes. There was a also a blip of worry about lead in December 2010 after a state test of water quality inside Verona homes. 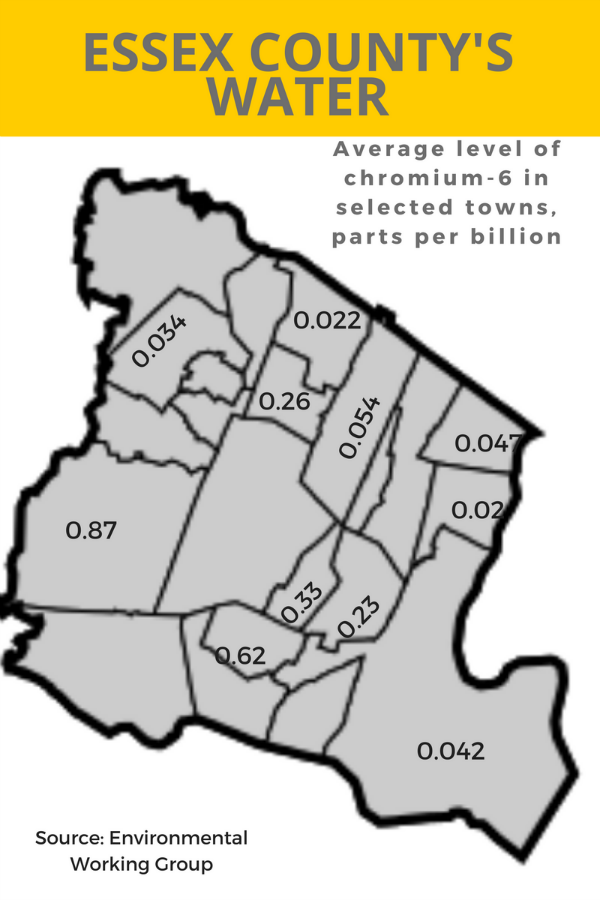 How does chromium-6 get into the water supply? In the area of California that was the focus in Erin Brockovich, utility company Pacific Gas and Electric was believed to have dumped 370 million gallons of chromium 6-tainted wastewater from 1952 to 1966. Verona has never been the base of any major utility activity, and we’ve had far less industry over the years than many other towns in Essex County. The data used by EWG indicated that the chromium-6 was overwhelmingly found in our own wells, rather than the water we buy from the Passaic Valley Water Commission.

One part per billion, the measurement standard used in the data, is a single drop of chromium-6 in an Olympic-size pool, which we just happen to have in Verona. The EWG and many scientists assert that chromium-6 is a carcinogen at even very low levels. EWG estimates in its report that if there are no changes in water safety, “chromium-6 in tap water will cause more than 12,000 excess cases of cancer by the end of the century.”

Verona’s statement on the matter is circumspect. “It’s important to remember that detecting a substance in water does not always imply a health risk,” it reads. “The key question that researchers seek to answer is whether the substance presents health concerns at the level it is detected. That’s why the federal regulatory process requires the EPA to examine potential health impacts of the substance, paths of exposure and occurrence data. A thorough evaluation of all this data increases the likelihood that new regulations will offer meaningful risk reduction. Verona Water is committed to meeting all regulatory standards for public water supplies including any new requirements for hexavalent chromium that may be instituted.