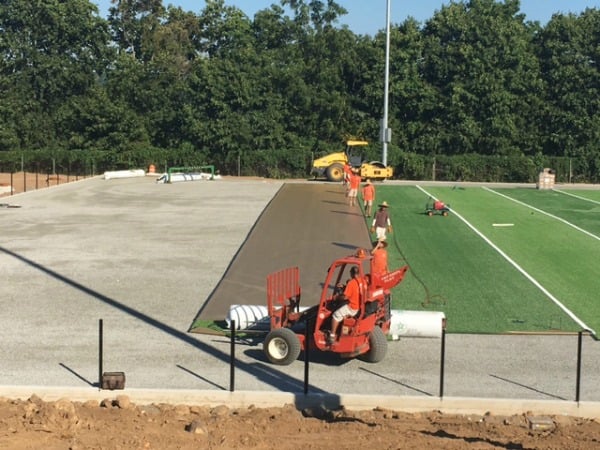 The upper field at Verona High School has been closed since the start of the 2012-2013 school year. But today, Sellitto Field took a big step towards re-opening as turf was laid down from end to end.

Workers from LandTek Group, which was awarded the field work only in May, gently unrolled each section of the field before stitching them together like a giant green quilt. To get to this point, however, they first had to excavate and crush more than 6 feet of construction rubble that had been used as landfill when the field was expanded in the late 1970s and then dig in drainage systems and a new sewer line to replace one that might have been a century old. While the four lights have already been installed at the perimeter of Sellitto Field, a great deal of landscaping remains to be done around the edges. The field is tentatively scheduled to re-open in mid to late September.

Across the parking lot by the upper field, LandTek workers have completed the expansion of the VHS tennis courts to five courts from four. The VHS girls tennis team has already held a practice on the new surfaces; Superintendent Rui Dionisio said the courts could be opened to the general public after all construction equipment is out of the way. The area just east of the tennis courts is being paved to add much-needed additional spaces to the usually crowded VHS lot.

Doc Goeltz Field, the lower field at VHS, is also making progress towards turfing. All of the old grass has been removed from the field and LandTek has begun excavations for the drainage system for a complex that will be able to host all of the high school’s field sports and the marching band. There will be no lights installed on the lower field, but the old cement bleachers will be resurfaced and a picnic area will be added in an area that connects the upper and lower fields.

The field turfing is bringing to a close a process begun on March 11, 2014, when Verona voters overwhelmingly approved a referendum to repair Verona’s six public schools, improve their security and technology, renovate the upper and lower VHS fields and expand and resurface the high school tennis courts.