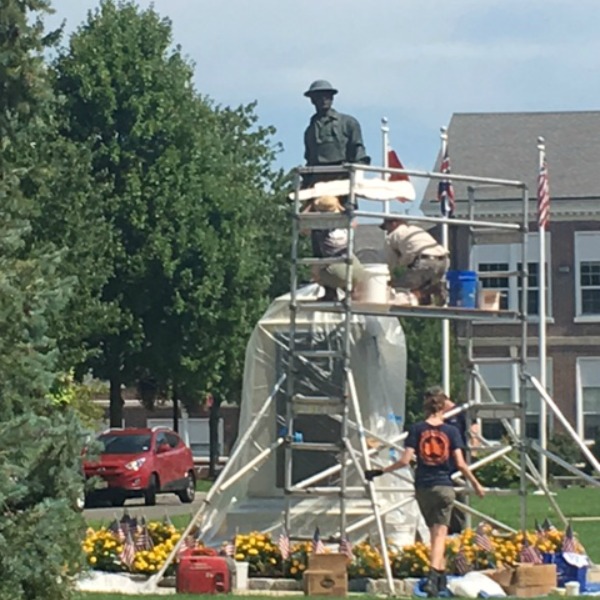 The World War I soldier immortalized in the monument at the steps of Town Hall is on the front lines of another campaign today, this time to restore a “doughboy” statue in New York City.

Early this morning, workers from the New York City Park’s Department’s Art & Antiquities Monuments Shop erected a scaffolding around Verona’s statue. They are making a mold of the bayonnet held by our infantryman, as well as the ornamental detailing on the main dedication plaque.

Once it has its molds, the NYC Parks team will recast those elements for their statue, which once stood on Boscobel Place in the Bronx, a small greenspace near what is now an off-ramp to the George Washington Bridge. The Bronx statue is an identical copy of Verona’s: Both were made by J. M. Fiske & Co., the preeminent monument maker in New York City in the late 19th and early 20th centuries.

The Bronx statue has faced many battles over the years. Its original bronze honor rolls have been pilfered and its rifle broken off. Since the late 1970s, when the statue was knocked off its pedestal and incurred damage to its arms and helmet, it has been stored in a Parks Department workshop in Brooklyn.

The New York City Parks staff has a lot of work ahead to restore the statue. In addition to the missing and damaged, the Bronx doughboy has a number of dents and cracks to repair. Once it has been returned to its original glory, the statue will be relocated to a site that might be even more familiar to Verona residents: the park just opposite Yankee Stadium at Jerome Avenue and 161st Street.

Verona’s statue will get one additional benefit from being an artist’s muse. The NYC Parks team will give our statue a thorough cleaning before they depart.

Three residents of Verona died in service to their country in World War I. You can read about their lives on “Verona Heroes”, a website created by Verona resident Rob Caruso.