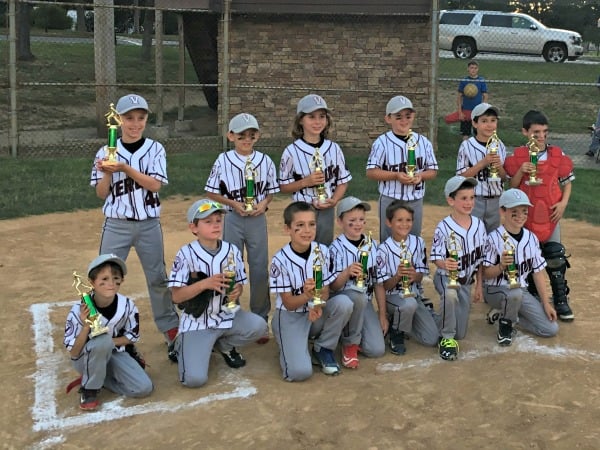 On Tuesday, the Verona 8U Barnstormers travel baseball team wrapped a very successful spring season with a championship.

In what may have been their most well-rounded performance of the season, the 8U squad battered the Denville Swampdragons 12-0 to clinch the Montville Spring League Silver Bracket title. Connor Zimany and Michael LoCurto combined to throw a two-hitter over the four-inning affair, which was ended at that point based on the league’s mercy rule.

Manager Rob Caruso’s squad exhibited tremendous poise all season as they were highly competitive in each game they played. The team, however, truly began to gel as it entered the playoffs. In the first round of the playoffs, the 8U Barnstormers bested a strong Montville team 10-8 in a nail-biter. In the semifinals, the Barnstormers stunned Caldwell, the number one seed in the silver bracket, with a 13-0 mercy victory. The momentum of the Caldwell performance clearly carried over into the championship game versus Denville as the boys performed well in all phases of the game with excellent pitching, flawless defense and a well-balanced offense.

If you're looking for a new home in Verona, we've got your eight. There are eight new listings...