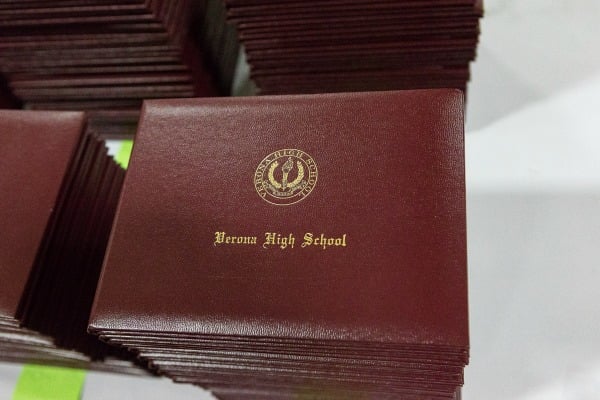 Verona High School graduated 148 students on June 17 in a ceremony at Caldwell University filled with pomp, circumstance, a hip-hop salute to the seniors from a teacher and a touching tribute by the valedictorian to his parents.

The evening’s guest speaker was VHS teacher Rich Wertz, who was recently honored by Princeton University for his dedication to secondary education. In his speech, Wertz took the graduates from a key time in New Jersey’s history–and its connection to the hottest musical on Broadway, Hamilton. Wertz, who teaches computer science and calculus, then proceeded to sing a version of the show’s opening number “Alexander Hamilton”, tailored to the class and the teachers who guided them through VHS. (He described his rap style as “old school”: “because I’m old” he said, “and I work in a school.”

Anthony Giuliano, the class valedictorian, hailed his parents–in rhyme–for guiding him through school and preparing him for life beyond VHS. He challenged his fellow students to challenge their assumptions of what success would be. While his father lacks the college degree that society uses as a measure of success, Giuliano said, “He does what he loves and he loves what he does, and more than that, he loves his three sons.” Of his mother, Giuliano said she has the job of her dreams in guiding her family, a job paid, he noted, “with love and respect.” “You can lose your money, your house and your fame, but love, my friends, will always remain.” (He capped his speech with a big hug for his parents, which you can see at the end of this video.)

The ceremony was recorded by Tom Jung, and you can watch it in its entirety below, or use these links to jump to your favorite section:
Processional
National Anthem
Joshua Cogdill, Principal
Richard Wertz, Honored Guest Speaker
Anthony Giuliano, Valedictorian and Student Council President
Rui Dionisio, Superintendent of Schools
Diana Flores, Salutatorian
Senior Video
John Quattrocchi, Board of Education President
Dominique Marino, Senior Class President
Presentation of Diplomas

Graduation 2016 was recorded by Tom Jung, a long-time volunteer in the Verona Rescue Squad. Seven members of the Class of 2016 have also served as VRS volunteers: Nicholas DeVivo, Sean Frazee, Sasan Hakimzadeh, Chris Luehs, Cory Meyer, Anthony Pengue and George Tamburino. As thanks for the video and in recognition of their service, you may wish to consider a donation to the Verona Rescue Squad.