Facebook
Twitter
Pinterest
WhatsApp
- Advertisement -
Four eighth-grade students from H.B. Whitehorne Middle School will be heading to Washington, D.C. in mid-June after qualifying at the New Jersey state finals of National History Day on May 7.

Alex Newman qualified in the junior individual website category for her work on Ada Lovelace, a Victorian aristocrat who was one of the pioneers of computer programming. “I like History Day,” says Newman, “because even if you don’t think of yourself as a ‘history person’, History Day helps you find a historical topic and relate it to things that you are interested in.” HBW teacher Katherine Castiglione was Newman’s advisor on the project.

Newman’s Website, which you can explore here, offers a detailed look at Lovelace’s influences, the analytical engine she created with Charles Babbage and her work on conceptual mathematics. “Even though it’s a lot of work,” Newman says, “it’s worth it. You learn a lot about researching. And when you finish your project, even if you don’t win, you still have a really cool result.”

A website by Ashley Baumgard, Carolyn Feeley and Leah Pandian also qualified for the national competition in the junior group website category. Their site was about Robert Falcon Scott, a British Royal Navy officer and explorer who led one of the first successful expeditions to Antarctica before perishing with his team during the Terra Nova Expedition of 1910–1913. HBW teacher Phillip Kratzman was the advisor on the group project.

The nationwide National History Day championship consists of regional, state and national rounds. Working within a yearly theme, students select an historical topic and do research on it. This year’s theme was Exploration, Encounter, Exchange in History. The History Day competition is an eighth grade social studies elective at HBW.

The students had faced their first challenge at a regional competition on March 12. In addition to Newman, Baumgard, Feeley and Pandian, a second group website created by HBW’s Kiera Egan, Gabi Montagna and Rebecca Siclari advanced to the state round, as did a group exhibit by Chloe Mathewson and Gigi Petti. VHS ninth graders Eric Frey, Gillian Lamb, Lily Dastis and Rebecca Marcillo-Gomez won the regional competition with a documentary analyzing the impact of Charles Darwin’s discoveries in both future scientific and societal movements. 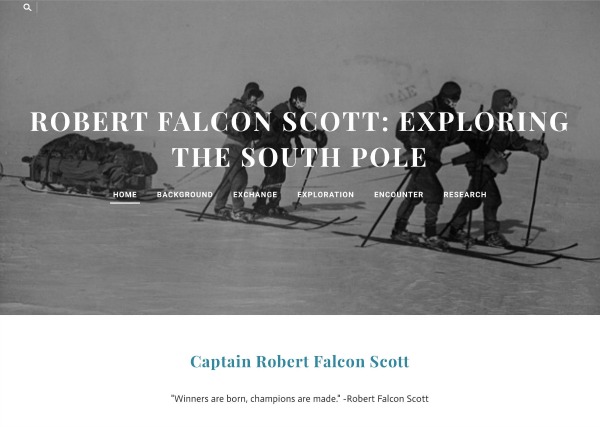 The New Jersey History Day competition was held at William Paterson University and last week, the young women went back to WPU to meet with National History Day judges to get feedback on their website entry.

“I think what I really appreciate about National History Day events,” says Ginny Allread, Leah Pandian’s mother, “is that they not only challenge the students to do something more, something above and beyond, but it takes them out of their environment and gives them an opportunity to mix with motivated young people from northern New Jersey and, as they advanced to the state-wide competition, from throughout New Jersey.”

The National History Day national competition will take place June 12 to 16 on the campus of the University of Maryland College Park just outside Washington, D.C.