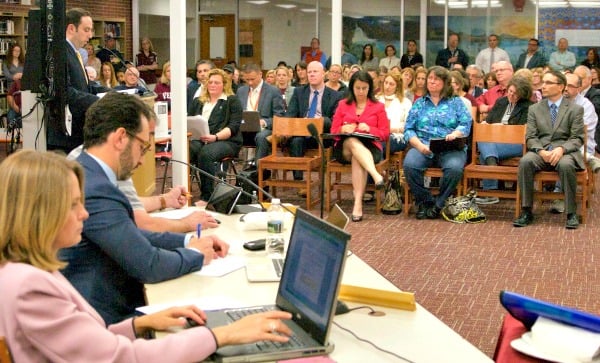 It was the longest, loudest, and angriest Verona Board of Education meeting in at least two years. It opened with the president of the Verona teacher’s union rebuking the BOE and ended with BOE members chastising the union president. And it did nothing to solve the issues surrounding the employment of Verona public school aides except kick the matter down the road.

The May 10 Board of Education meeting had more than two dozen items on its agenda. But unfortunately perhaps for the students from Forest Avenue Elementary School, who opened the meeting with a ringing endorsement of the “One School, One Book” reading initiative, there was only one thing that the more than 100 people in the room wanted to discuss: Resolution #20, which would have authorized the BOE to investigate whether it would be feasible to have the HR work surrounding the teacher’s aides handled by a private contractor. Instead of having three Verona special education employees tied up in paperwork and record-keeping for the 68 aides, the work would be outsourced to a private firm that would also do the initial screening of job candidates. Opponents raised the prospect of Verona aides losing jobs, even as the BOE asserted that any outside contract would compel the vendor to put all Verona aide who wanted to work on its payroll.

There were compelling statements from the parents of both special education children and children in the general education population about the contributions of Verona’s aides. There was a glimpse into the potential shortcomings of outsourcing: Frequent turnover among the temp aides provided under a contract that BOE established last fall with a private company. There were multiple accusations that money was driving the BOE to consider outsourcing, even though the Board freely admitted that outsourcing could increase some costs in the aide program and even though the BOE is now dominated by members with direct experience as educators and aides. Lisa Freschi worked as an aide while her sons were going through school; Michele Bernardino is a special education teacher now in Newark and Michael Unis has been a teacher and charter school administrator.

The meeting ran nearly three and a half hours. You can watch it in full below. Resolution #20 was tabled, likely for the next meeting, which will be May 31.