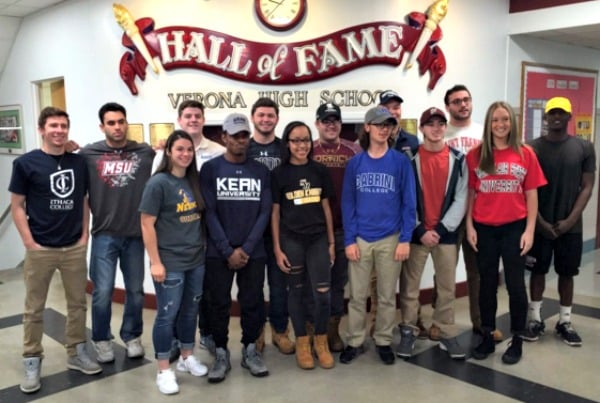 As you might expect from a year that produced another state championship football team, many of this year’s athletes will be on the gridiron for college teams. Crawford will be at Salve Regina College, a Division III school that is part of the New England Football Conference. Cummings is headed to St. Francis University, a Division I school that will step outside its usual northeast competition to face Montana in its season opener. DePaul is joining the Division III Red Hawks at Montclair State University, while Luehs will play for Moravian College, also Division III. His signing sets up a potential Hillbilly reunion, since Moravian plays Johns Hopkins, where Bill Ferrari (VHS Class of 2015) is a tight end. Riggio, who also earned honors in wrestling, will be playing for Union College, a Division III school in Schenectady, N.Y.

Brian and Chris Valentine were on the Hillbilly football squad, too, but they also play lacrosse and that’s the sport they will continue with in the fall. Brian will be at Kean University, while Chris has signed with Rowan University.

Barkley is also headed to upstate New York to run track and field for the College of St. Rose, a Division II school in Albany. She won’t be far from Chris Yeates, who is running track and playing soccer for Division III Ithaca College.

Garrison will join the golf team at Cabrini College in Radnor, Pa., while Karpinski, who wasn’t at today’s ceremony, will be serving up tennis at Rutgers University.

Maguire will also become a Red Hawk when she joins Montclair State’s lacrosse squad. Robson will continue with baseball at Stockton University, while Selby is joining the softball team at Neumann University, which is playing in the Colonial States Athletic Conference semifinals this weekend.