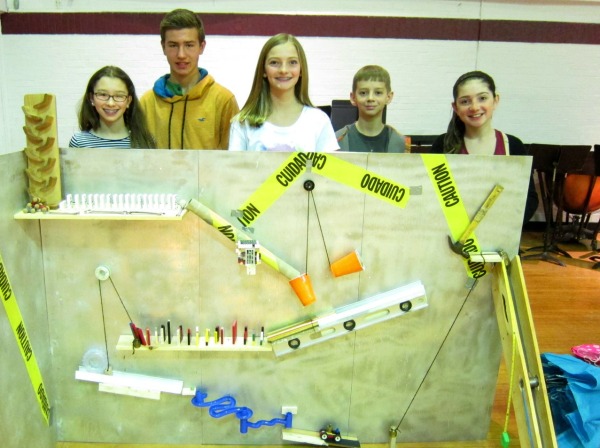 If you wanted to teach someone about complicated machines, you couldn’t do much better than showing them the drawings of 20th century cartoonist Rube Goldberg–unless, of course, you got them to actually build a Rube Goldberg machine. That’s just what a group of seventh graders at H.B. Whitehorne Middle School did, and now they’re part of a national competition to designate the best Rube Goldberg machine.

Every year, Rube Goldberg, Inc., a group dedicated to keeping the cartoonist’s spirit of inventiveness alive, challenges middle school, high school and college students to build a crazy machine that takes at least 10 steps to do a very simple task. This year’s competition is “Open An Umbrella” and, in late March, nine teams of students from Julia Harth’s Technology, Engineering, & Design cycle class built machines and held a competition to pick a winner from HBW.

The team that won HBW is called Construction and teammates Hannah Maida, Melanie Naeris, Lucas Ross, Grace Russo and Buster Shick seem to have recycled all the toys of their childhood into their contraption. There are 15 steps to it, from the rolling of a toy car to the dropping of the weight that opens the umbrella.

The Rube Goldberg judges didn’t pick Construction as a winner, but it isn’t entirely out of the running. There’s a People’s Choice award category, and every Verona vote will help. Sign into your Facebook account and then go to this page and vote.

Not that complicated, right?