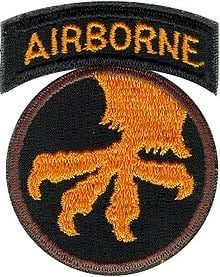 Paul Healy, lifelong resident of Verona, entered into eternal rest on April 26, 2016, at Alaris Health of Cedar Grove, at the age of 93. Paul was born on October 31, 1922 to Bernard Healy and Elizabeth Beryl Liberty Healy.

Paul was a World War II U.S. Army veteran. He served in the Panama Canal Zone and later in Belgium during the Central Europe campaign as a member of the 507 Parachute Infantry Regiment, 17th Airborne Division. Paul served under Colonel Edson Raff as one of “Raff’s Ruffians”. He was a graduate of the U.S. Army Parachute School, Fort Benning, Ga. Paul is a Life Member of VFW Post 6255, Cedar Grove.

Mr. Healy’s wartime experiences were the start of two of his lifetime passions; motorcycles and airplanes. Panama was where he became an avid motorcyclist. Many of us may have never seen Paul on a motorcycle but we all remember the many cold days where we saw him walking in Verona in his motorcycle jump suit. As a paratrooper Paul loved airplanes and later held a pilot license for single engine private airplanes for many years. He was a member of the Aircraft Owners and Pilots Association.

After the Army Paul started his own business, Healy’s Express Moving and Trucking but his main passion was the masonry trade. He completed his mason apprenticeship in October 1949 and went on to become one of the premier cement finishers on the East Coast. Paul was a Life Member of Local #4 of the International Union of Bricklayers & Allied Craftsmen. In his spare time he enjoyed flying small aircraft, playing a round or two of golf and having a good meal at Morley’s Tavern. From 1991 to 2006 he enjoyed keeping drivers in line as a Verona Crossing Guard.

Over the past several years Paul could be seen walking up and down Bloomfield Avenue stopping in several different stores to say hello to friends while on the way to his favorite place for great food, Jack’s Café on Bloomfield Avenue. He would always use his umbrella as his cane. He is a Verona native who will be missed.

Paul is predeceased by his parents and his siblings, John Healy, Bernard Healy, Mary Jane Myers and Elizabeth Healy. His memory will live on with all his nieces, nephews and cousins of multiple generations as well as many dear friends.