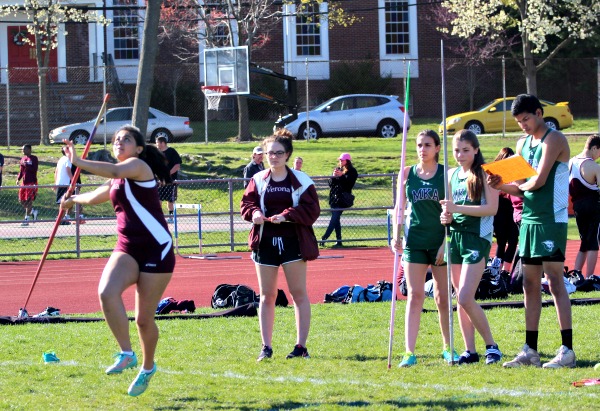 The Verona High School girls track team picked up six first place finishes on Wednesday, but it was not enough to push the team past Cedar Grove in Verona’s first competition of the year. 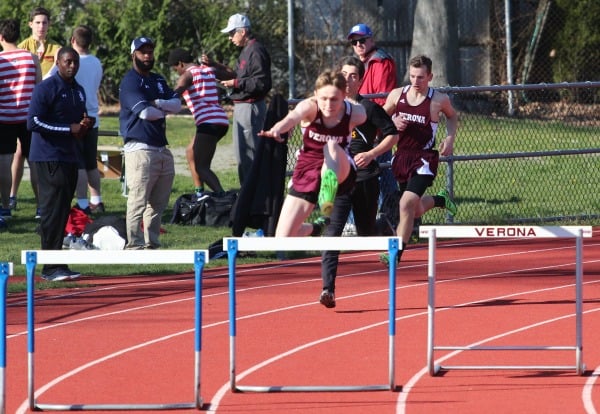 The final result was Cedar Grove 75, Verona 60 in the girls meet.

The VHS boys team fell to Cedar Grove 87-48, but there were several solid performance. Sophomore Cullen Pelfree (above) won the 400 hurdles and 100 meters, and senior Ryan Symons jumped 6 feet to win the high jump. Symons also won the long jump. Junior Jake Parent won javelin with a personal best throw of 150’3 and and placed third in discus, throwing 90’2.
Senior Ryan Ramsthaler won the 800 meters in 2:12, while fellow senior Peter Marlo took seconnd in javelin and third in high jump. Senior Anthony Giuliano took third in the 400 hurdles, pole vault and 110 hurdles. Sophomore Evan Huaman took third in the 200 and second in the 400m, while sophomore Shea Herko placed third in shot put. Freshman Philip Chivily took third in the 3200.