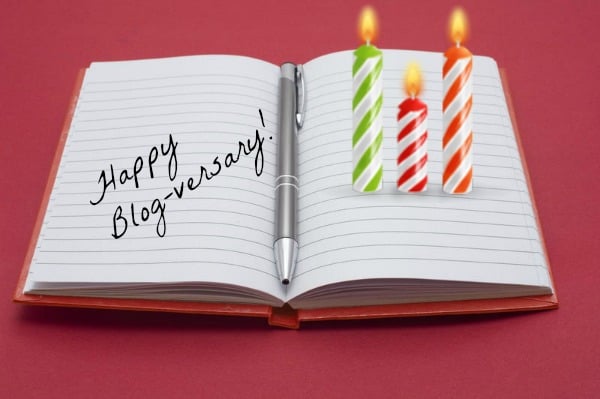 Three years! Who would have thought that I’d actually keep this up for three years?

I’ve been writing on and off all my life. Hidden in the depths of my moldy and musty basement are the dreaded notebooks that prove this. I can still remember the black and white composition book that I first starting writing in. Was I in third, fourth or fifth grade at the time? While I don’t remember my age, I do remember the notebook. I believe I colored the cover, filling in the white spots, with the colors of Bic markers. They were the favorite of my 3rd grade teacher. (Isn’t amazing what useless trivia the brain can hold? I don’t think I’ll ever forget Mrs. Williams’ matching purse and shoes; stern, close-cropped blondish hair and her Bic pens.) It was in third grade that Mrs. Williams read to the class The Long Secret by Louise Fitzhugh, a sequel of sorts to Harriet the Spy, which I wouldn’t read until years later. Mrs. Williams read many books to us: The Flight of the Doves, Don’t Take Teddy, The Prince and The Pauper, The Lion, The Witch and The Wardrobe…there were probably more, but those are the ones my aging brain remembers. (And that I remember them at all is a testament to Mrs. Williams’ imprint on me.)

In The Long Secret (and Harriet the Spy, as I would later learn), Harriet kept a notebook. So I decided to take up one as well. I didn’t spy, as Harriet did. I didn’t have the nerve. Or perhaps my life wasn’t as interesting. Harriet made up her own “game” of spy and I tried to do the same, making a map. It didn’t work out.

But I kept the notebook and I kept writing. Not always diligently, but I continued from elementary school on. The notebooks were diaries. The notebooks contained bad pieces of fan fiction. The notebooks held short stories, plays and poetry. None were particularly good; most were pretty awful.

As time and technology progressed, I started writing using a typewriter (anyone remember those?) and then on computer. While I still have my original notebooks in a bin in the basement (or so I think), the obsolete floppy discs that I saved my writings on are most likely long gone.

In spite of technology, I still use notebooks to document trips and vacations. (Although with the advent of social media I find that I do that less and less.) When my son was born 10 years ago, I documented everything in a notebook. (This included such thrilling items as every time he pooped and how much formula he ingested at each feeding.) I kept it up until I ran out of notebook pages, which pretty much coincided with his first birthday.

So it should really be no surprise that once I caught up to technology that I blog on a pretty regular basis. I may not have millions of readers (though that would be nice), but I am grateful to every single person who takes a few moments to read what I write. To me, the number doesn’t matter; I’m going to keep writing. It’s what I do. It’s what I’ve always done.

Beth Shorten is a life-long resident of Verona. For the last three years, she has been chronicling life here on her personal site, Bfth’s Boring Blog.