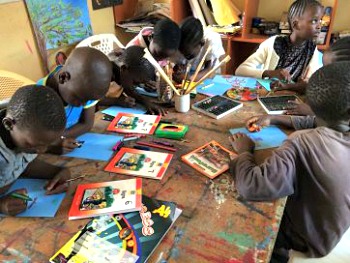 For several weeks, you may have noticed an ad on MyVeronaNJ.com promoting something called Kiwimbi. If you clicked on it, you were taken to the website of a group that has created a school and a library in a remote area of northern Kenya. And you might have wondered what that all had to do with Verona.

Derek Mithaug, one of the owners of Verona’s new electric bike store Electric Spokes, has been on the board of Kiwimbi since 2014, and he believes deeply in its mission. “Education is the gateway for everything,” says Mithaug, who was an executive at several non-profits before starting Electric Spokes. “We take education for granted, but in other parts of the world, there is an incredible need for access to the steps of education.”

To raise awareness of that need, Mithaug dedicated part of Electric Spokes’ ad campaign to showing banners for Kiwimbi as well.

Kiwimbi was founded by a former New Jersey professor who returned to his native Kenya after two decades in the U. S. It provides classes in English and math to mostly middle-school-aged students to supplement their public school education and help them pass the national test that lets them go on to high school. Public schools in the rural area are rudimentary and students often share textbooks and school supplies. The Kiwimbi teachers also help out in the public schools to foster individual learning styles and critical thinking.

But that’s not all. Carol Ulmer, who is one of Kiwimbi’s trustees, notes that the library Kiwimbi created was the first public library in its remote area. “In addition to the thousands of books housed there, Kiwimbi staff provide a lending library in several nearby communities and shuttle books to and from the 50 outlying schools that they serve,” she says. “Kiwimbi has a set of e-books that are pre-loaded with the entire Kenyan curriculum for grades one through 12 and other literature. Students are taught to use the e-books and have access to books they would not otherwise. In 2016, Kiwimbi will be installing WiFi in its library to permit access to the Internet. Technological needs are great and Kiwimbi hopes to develop further its capabilities to provide the technology that enables greater learning.”

Kiwimbi also offers vocational programs in sewing and tailoring and art including painting, grass weaving and beading, and will begin a program in carpentry this year. The goal is to help people make a living in their community, much like Mithaug and business partner Mark Baraniak are making a living at their business in Verona. “These kids are hungry for everything,” says Mithaug. “They want to learn.”

Kiwimbi produced the video below about how education is changing the life of one single mother; you can learn more about its initiatives here.