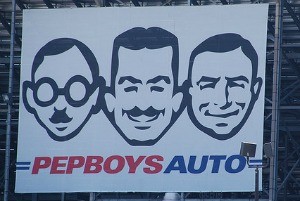 The New Jersey Division Consumer Affairs announced Friday that it filed a civil complaint in Essex County Superior Court against a number of Pep Boys stores, including the one in Verona.

The state alleges that the store, as well as four other Pep Boys locations and seven Advance Auto shops, failed to comply with consumer laws regarding price scanning, disclosure of merchandise pricing, and notices as to the right to a written estimate for automotive repairs.

“For many consumers, a trip to the automotive parts store can be a confusing foray into unfamiliar territory. Shoppers who lack familiarity with such merchandise often rely on the retailers pricing statements to guide them in their purchases. When retailers are not transparent and accurate in their pricing, consumers suffer,” said Acting Attorney General John J. Hoffman.

The Consumer Affairs office says that its investigation found that at the Pep Boys stores in East Brunswick, Union, Roselle, Caldwell and Verona a variety of merchandise scanned at a price higher than the posted selling price, in violation of the CFA and the Weights and Measures Act. The complaint also alleges that merchandise at the Pep Boys stores in East Brunswick, Roselle, Caldwell and Verona was offered for sale without a plainly marked selling price, in violation of the CFA. Such merchandise included air fresheners, tires, license plate mounts and motor oil. Additionally, the complaint alleges that the Pep Boys stores in Roselle, Caldwell and Verona failed to conspicuously post the consumer notice regarding the right to a written estimate for motor vehicle repairs, as required by the Automotive Repair Regulations. There were similar problems at the Advance Stores in East Orange, Newark, Linden, East Brunswick, Bloomfield, Avenel, and Fanwood. The state is seeking unspecified civil penalties, attorneys’ fees and investigative costs from both retailers.

“When it came to merchandise pricing, we allege that Advance Auto and Pep Boys left consumers in the dark,” said Steve Lee, Acting Director of the New Jersey Division of Consumer Affairs. “These enforcement actions send a message that merchants who attempt to engage in this kind of deceptive conduct will face legal action.”

Pep Boys did not reply to an email requesting comment on the state’s allegations.

The Consumer Affairs office said that consumers who believe they have been cheated or scammed by a business, or suspect any other form of consumer abuse, can file an online complaint with the State Division of Consumer Affairs by visiting its website or by calling 1-800-242-5846 (toll free within New Jersey) or 973-504- 6200.