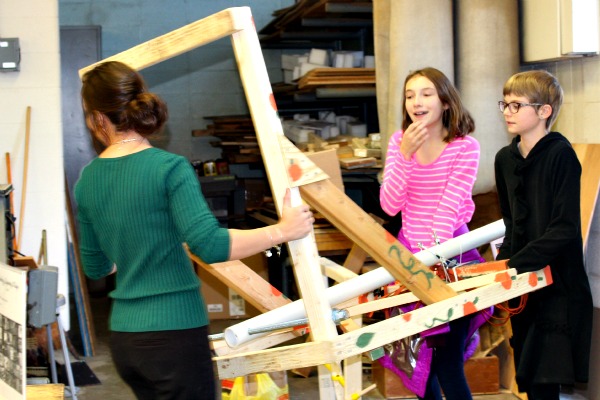 When H.B. Whitehorse’s long-time tech-ed teacher retired in June and the superintendent announced plans to make the position part of the school’s STEM curriculum, some parents wondered what would become of signature tech-ed projects like the mini-catapult. Now, three months into the new school year, we know the answer: Thanks to the added dose of science, technology, engineering and math, the catapult got got a whole lot bigger. On Tuesday afternoon, 13 middle-schooler-sized catapults are going to be wheeled out onto HBW’s field for the school’s first-ever pumpkin-chucking competition.

For several weeks, more than 60 HBW boys and girls have been building catapults as part of an after-school project. The teacher heading the project, Julia Harth, showed them two models and a video on pumpkin-chucking machines. The students then had to research their options, from slingshots and catapults to centrifugals and trebuchets. Pneumatic cannons (the record holders in pumpkin chucking) were a no-no, as were any devices bigger than a student. Each team had to submit a plan. “We made sure it was realistic and safe,” says Harth. “But we didn’t want to give them too much direction. We wanted them to find their own way.” That appealed greatly to Logan Machnowski, a fifth grader who is a natural-born tinkerer and pumpkin-chucking fan. “Did you know that a pneumatic cannon launched a pumpkin almost two miles?” he asked a reporter.

Tinkering is central to the STEM approach, which emphasizes identifying a problem and brainstorming ideas before testing a solution. Flops are OK, and several of the students tweaking their machines on Monday afternoon admitted that aspects of their original design had failed. Daphne Glatter’s team’s first try at torsion snapped their frame. “We didn’t realize how powerful the torsion was,” says the seventh grader, who’s new to HBW and thrilled by the project. “I said, ‘whoa, this is heavy machinery we’ve got here’.”

Heavy and complicated machinery. Alec Hamson, Nick Priori and their fifth- and sixth-grade teammates first wanted to build a wheel-driven machine. “It was too intricate,” says Hamson. “We went with a spring-loaded lever and an adjustable front brace.”

The catapult built by Emma Rice and Eleanor Newman’s team is called “Mr. Squashy”, and for good reason. “We practiced with a grapefruit over the weekend and it went pretty well,” said Rice. “We had grapefruit mush.” The project, by the way, attracted just about as many girls as boys. “Building things is cool,” says Lucy Hogan, a sixth grader whose Shooting Stars team included her sister Emma, Hanna Vargas and Josie Shust. “I like thinking activities,” says Shust.

Pumpkin chucking isn’t the only new manifestation of STEM in the middle school. Harth’s regular classes made musical instruments from recycled materials and then used an electronics kit called MaKey MaKey to actually get sound out of them.

The pumpkin project has had an outpouring of support in and out of HBW. So many kids signed up to participate that Harth had to recruit other teachers to supervise the work, including science teachers Carol Thomas, Kate Smith and Paul Moschella, social studies teacher Phillip Kratzman, Sheila O’Hare-Barrows and art teacher Tony Saltalamacchia. Tech teacher Andor Kish and science/math teacher Marissa Albano also chipped in. VEA, the teachers’ union, provided some funding, the pumpkins were donated by Hillcrest Farms, Party Fair donated decorations and the Towne Scoop and AMC Theaters donated prizes.

“It has been great so see so many kids interested in doing STEM on their own time,” says Harth. Several students are already looking forward to revising their designs for next year’s pumpkin chucking, but Harth might have another project for them before then. “In spring,” she says, “I hope to do a cardboard canoe race.” 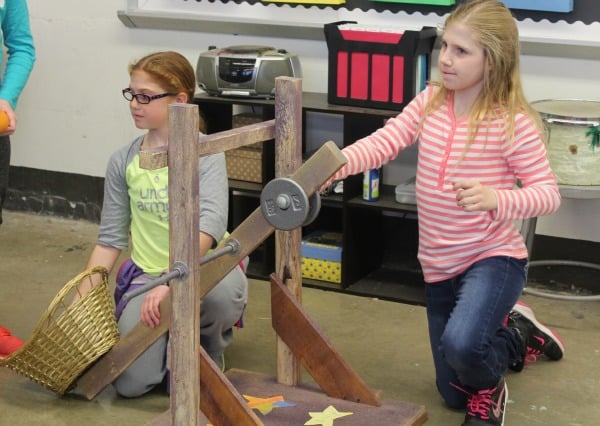