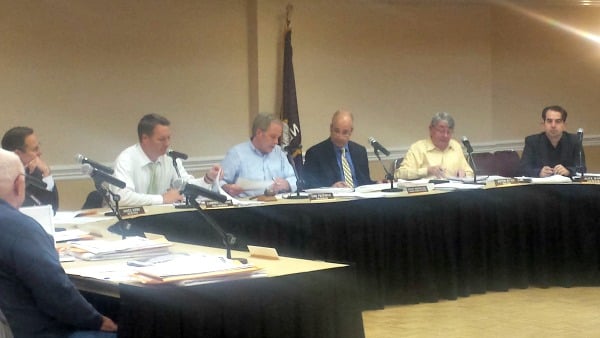 It took only a little more than 30 minutes tonight for the Planning Board to unanimously approve the Board of Education’s plan for renovating the tennis courts at Verona High School.

The BOE had made a few small adjustments to the plan it brought before the Planning Board last month, which is part of the school referendum that Verona voters overwhelmingly approved in March 2014. The approved plan, which will add a fifth court and 38 parking spaces to the site and remediate the four existing courts, will retain the four current light pole spots. The BOE had initially put forward a plan that removed two of the existing poles to meet objections from neighboring property owners, but Township Engineer Jim Helb asserted at the September 29 meeting that that would make fewer courts available for play by residents. The amended plan will, however, swap the existing metal halide lights for LED lights that can be quickly turned on and off and positioned to direct more of the light down onto the courts. The existing lights can take up to 15 minutes to reach full illumination, and just as long to turn off. The new lights will also make it possible for the BOE to turn off all power when the nets have been taken off the courts in winter, limiting their appeal as an after-hours gathering place.

The March 2014 referendum funded the installation of WiFi in all six district schools, replaced the nearly 60-year-old heating system at Verona High School and improved security at all schools. While much of the work covered by the referendum has already been completed, the renovation of the tennis courts and the lower field at VHS has been held up by 17 families around the high school property, largely from Dodd Terrace. Last November, when the BOE was supposed to have had only a “courtesy” review of the work, the families’ lawyer, Robert F. Simon, used a procedural tactic to force the courts and fields into a full site plan review. At the November hearing, the Planning Board approved the referendum work to expand the music room at VHS without opposition from the families.

The BOE attorney said last night that the revisions submitted had been agreed to by Simon’s clients, none of whom were at the meeting. The opposition has cost the BOE $55,000 for the full site plan, plus $41,176 for renting bleachers, portable bathrooms and a scissorlift for another year of football on the lower field.

Those figures do not include the additional legal costs that the BOE is incurring, which will continue because the BOE must come back before the Planning Board in January for a hearing on the lower field renovation. That plan will turf the field for use by multiple VHS teams and the marching band, but not light the field. The BOE has achieved enough savings elsewhere in the referendum work to also turf the upper field at VHS. That field has been a concern since the fall of 2012 when two holes opened on it. At least one had been caused by improper infill used to expand the field three decades earlier. The renovation plan will cap Sellitto field with a specialized landscape fabric and new topsoil before turfing it. The BOE will light the upper field, which is bounded on three of its four sides by high school property, with just four light stanchions, instead of the eight that would have been needed on the lower field.

Previous article
Letter To The Editor: Food Pantry Says Thanks
Next article
VHS Names September Students Of The Month