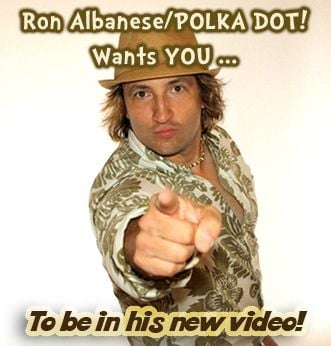 School teacher, parent, and long-running acclaimed family entertainer Ron Albanese is calling on his Verona Polka Dot Pals to join him in the filming of a video for his new song “Jumpin’ Jack Attack!”

The shoot will be happening as part of his appearance at the annual Kinderfest event at Our Lady of The Lake church on Friday, October 2. Filming time is scheduled to take place around 6:15 p.m., and will run, Albanese says, about “20 minutes of fun.”

According to Albanese, the peppy tune–which is “100% Kiddie Rock ‘n’ Roll!”–is about “strutting your stuff” and doing the fun exercise that “anyone of any age” can do and “do well!” The performer adds that the video’s concept will reflect the fact that Polka Dot! music is “immediate, jump in kind of stuff, for the young–and young at heart!”

Children of all ages are invited to come sing, dance, and laugh along–and do some jumping jacks. “Parents can be in the video, too,” Albanese adds. “It’s going to be cool!”

Reserve a spot for you, and your child/children by mailing Albanese at [email protected] By doing so, you agree to allow yourself/child/children to 1) be filmed, and 2) broadcast in various media in the official Ron Albanese/Polka Dot! promotional video for the song “Jumpin’ Jack Attack!”

Once folks are confirmed, they will be emailed the new song “so they can practice”, Albanese says. They can also check out www.RonAlbanese.com.