VHS Library Gets A Major Makeover 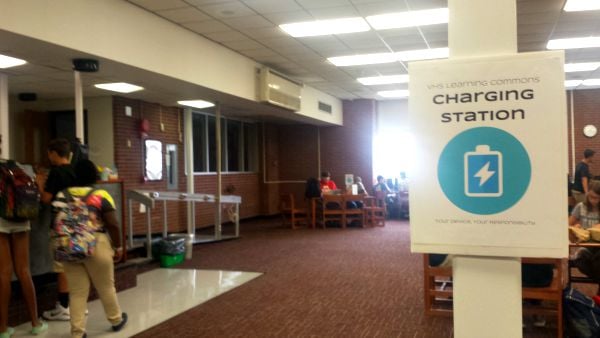 There’s been a lot of change at Verona High School this year: a new principal, a new vice principal, a new emphasis on getting to class on time. But nowhere has the school changed more perhaps than in the space formerly known as the library.

It’s called the VHS Learning Commons now, and under new Library Media Specialist Maria Benz, it has taken on the vibe–and allure–of a college campus. There are school Chromebooks to borrow, charging ports for the phones and tablets that students bring from home, quiet study areas and group work tables, a never-ending supply of coffee and muffins, and a fresh perspective on the book collection. Benz surveyed the students to find out what they would like to read and whether they want e-books or paper. She’s placed a large order for new books and has an even larger wish list (more about that in a minute).

“If they are looking at the shelves,” Benz says of the students, “they have to find something they want to read.”

But to make room for the new, Benz first had to move out the old. She de-accessioned roughly 1,000 books, some of which hadn’t been checked out in many years. She kept the classics, like The Scarlet Letter, but students can also find Scarlet, a science fiction work from 2013 that revolves around extraterrestrials. There are anime titles and graphic novels, both of which draw on the comic-book style fiction that is popular with teens.

The student input that helped shape the new collection is turning up in other places too. Benz has convened a student advisory board to help plan a series of lunch-time events in the Learning Commons, since all of VHS has lunch at the same time now. Students helped choose a stack of board games that can be pulled out when they need a break from studying. A back corner of the room is being turned into a “Maker Space”, where students can work with 3D printers, record a podcast and explore gamification, a trend that is infusing elements of video games into real learning. Students are also going to building a countertop to run along the room’s large glass wall and provide an extra perch for laptops and coffee. (The Learning Commons might be single-handedly reviving the earnings of VHS’ cafeteria vendor since students go through 12 large pump pots of coffee and several dozen muffins every day.)

“We’re encouraging them to take ownership of the space,” Benz says.

Benz is still building out the Website for the Learning Commons, which will features not only its book catalog, but research resources for every subject area at the high school including a direct link to the e-learning site Khan Academy. And students, who are getting accustomed to following their principal and vice principal on Twitter, can also use social media to stay on top of what’s happening at the Learning Commons (follow @VHSLC). There will be a full section of resources for teachers too, as they expand their use of Google apps for education.

And then there’s the wish list. Faced with a school budget that will only stretch so far, Benz is soliciting donations of young adult fiction from the community. She’s also created an Amazon.com Wishlist for the Maker Space, to get unusual items like an Arduino starter kit and a video studio green screen. “Rather than just give us money,” says Benz, “they can do something very specific for the space.”