Surfing When You Can’t Stand 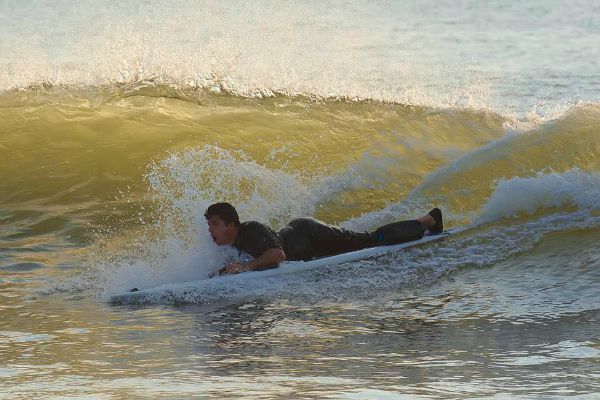 Scott Chesney says he never learned to “surf on his feet”. That might not seem like an odd statement; most of us, after all, are too chicken to stand on a thin piece of wood in a roiling ocean.

But Chesney has been paralyzed from the waist down since the age of 15 due to a spinal stroke. Once a star athlete at Verona High School, Chesney has never let a wheelchair get in the way of where he wanted to get in life. So when he decided this past winter that he was going to learn to surf, it was clear to all who know him that, well, he was going to learn to surf. And so Mike Zichelli and Rick Papera, Chesney’s childhood friends from Forest Avenue elementary school, got to work.

But how to create a board for someone who can’t stand up once he gets into the face of the wave? Zichelli, who now makes surf boards as a hobby when he isn’t riding the Jersey shore and exotic spots like Costa Rica, reached out to Robbie Nelson of ProSurf Coaches, the Adaptive Surf Project, and Gene Wahl, the owner of Essence Surf over in Totowa.

They created a board that they thought would work. Instead of relying on one fin under the back end of the board, they put another under where Chesney’s hips, and his leverage, would be. They put handles up front on either side and fastened pool noodles to the back to keep Chesney’s legs in position. But there were so many unknowns about what Chesney would need when he got in the water that Nelson dubbed the project “Moon Lander”. “On the moon,” explains Zichelli, “you don’t know what you need until you get there.”

By mid-July, the Moon Lander and Chesney were ready to hit the Jersey surf. Nelson talked with Chesney about the dynamics of the surf and took charge of pushing the board into the right waves. Zichelli and Papera were close by in the water, and another team of volunteers were at the shoreline to keep Chesney from getting caught in shallow water at the end of his run. “It’s pretty easy to get people out to help Scott,” Zichelli says.

The adventure was so successful that the team was back in the waves two more times in August. “Scott’s abilities and determination have eclipsed anything I could have imagined,” says Zichelli.

Chesney, who is a motivational speaker when not chasing waves, is taking it all in stride. “Surfing has always been a passion of mine,” he says, “and although I never learned how to surf on my feet, the opportunity to surf, not only for enjoyment but competitively, has now opened thanks to Team Moon Lander. Thanks to Mike Zichelli, Rick Papera, and Coach Robbie Nelson, I have reconnected with my heaven on earth, the ocean, and am eagerly awaiting the next wave.” (Team Moon Lander has chronicled their work on a Facebook page called “The Next Wave“.)

“Sometimes I wonder if the learning curve would be easier had I surfed when I could move my legs,” Chesney muses. “Still, I am a believer that life has evolved as it should and now is my time to live and learn more about my passion through as many experiences in the ocean as possible.”