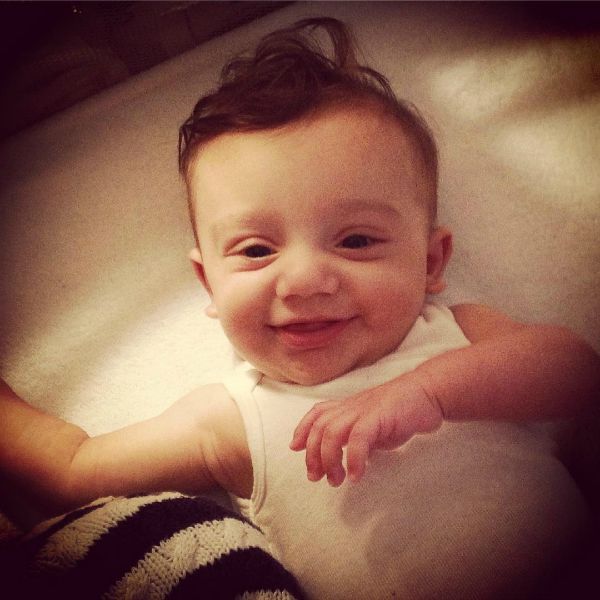 At his age, Micco LaRosa should be focused on one thing: discovering his toes. He’s six months old, and playing with toes and fingers should be priority number one.

Instead, Micco has to spend his day taking medicines and vitamins, eating special food and visiting doctors and hospitals. That’s because Micco has a liver disease that affects maybe one in 100,000 children in the world. It’s called Alagille Syndrome and it’s so rare that there are many unknowns about its path and prognosis.

“We really don’t know what we’re up against,” says Catrina LaRosa, Micco’s mom. “It could be so mild that it will go unnoticed or it could be so bad that it affects a lot of major organs. Each case is very different.”

The LaRosas moved to Verona four years ago and had their first child, Micco’s older brother, two years ago. They settled into a life of backyard gardening and future plans. But when Catrina was pregnant with Micco, her water broke 10 weeks early. She was put on bed rest for four weeks and Micco was delivered six weeks premature. He was treated for jaundice in the neonatal intensive care unit at Morristown Medical Center’s Goryeb Children’s Hospital.

Despite the treatment, Micco’s levels of direct bilirubin continued to rise. Direct bilirubin is the result of the normal breakdown of red blood cells and it is supposed to pass through the liver and out of the body. Micco’s wasn’t, and that, to the doctors at Goryeb, raised the red flag of liver disease.

So Micco went to see Goryeb’s pediatric liver specialist, Dr. Nadia Ovchinsky, a young woman who just happens to be one of the pre-eminent pediatric liver specialists in our area. In addition to practicing at Morristown, Dr. Ovchinsky is the director of pediatric transplant hepatology at the Children’s Hospital at Montefiore in New York City and an assistant professor at Yeshiva University’s Albert Einstein College of Medicine. Dr. Ovchinsky put Micco through a battery of tests to rule out blockages in the bile ducts and other problems, before identifying Alagille Syndrome as the cause.

“She was just wonderful to us,” says Caterina LaRosa of Dr. Ovchinsky. “She has such a way about her.”

Catrina and her husband Mike LaRosa now spend their days talking to friends and family about Micco’s liver disease and how it affects his body. He has a slight heart murmur and an eye condition that might mean early glaucoma. Through social media, they discovered a “friend’s best friend’s sister” in upstate New York who also has Alagille Syndrome. They’re going to participate in the Miracle Walk in Verona Park this fall to benefit the NICU unit at Saint Barnabas Hospital and the Liver Life Walk New Jersey in the park next spring. Because the family doesn’t know what the future holds–Alagille Syndrome peaks between ages three and ten and could require a liver transplant–they have set up an online fundraiser through a crowdfunding site called YouCaring.

Micro seems unfazed about all the fuss. “He’s so happy you’d never know that anything is wrong with him,” says his mom. “He’s keeping it together better than his parents.”