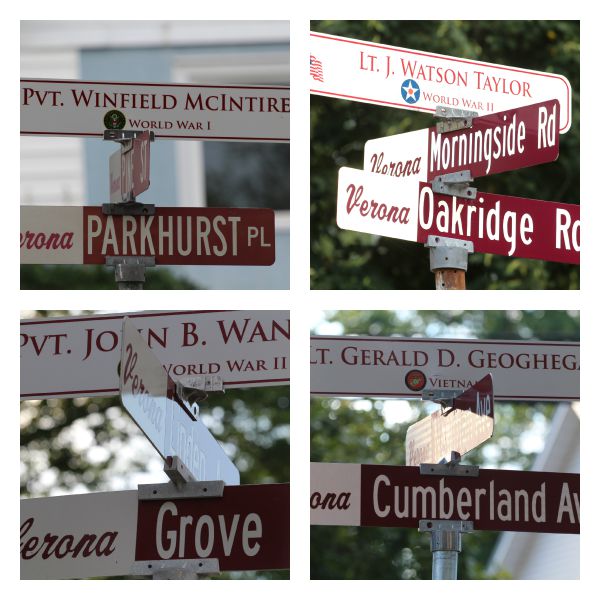 Every Memorial Day, we hear the names of 44 Verona residents who died in service to their country. Now, we can come one step closer to knowing who they were in life.

The Verona Public Works Department has completed the installation of commemorative signs honoring each of the fallen men at locations around town. The signs have been placed on top of existing street signs, most at the intersection closest to where the men had lived. The sign for Patrolman Theodore Braun, the only Verona Police office to die in the line of duty, has been placed in front of the Verona Police Department.

The signs are the result of several years of research by Rob Caruso, who compiled histories on the life and death of each man for a website he calls “Verona Heroes”. He chronicles men who were drafted into service, and men who volunteered. Seaman William A. Wittenweiler Jr. enlisted in the Merchant Marines, Caruso found, after being rejected by several other branches of service. He was declared missing at sea in August 1942. The men participated in most of America’s major conflicts, from the Civil War (before Verona was even a town) to the Vietnam War.


While Caruso thinks of all those who died as heroes, some of the men received special recognition for their bravery. Capt. David Q. Hammond, an Army Air Force officer, was cited by General Charles de Gaulle and the Provisional French Government. Lt. Warren O. Van Winkle, received a Distinguished Flying Cross, Air Medal and three Oak Leaf Clusters for holding the controls of his plane long enough for members of his crew to parachute to safety after it was hit by enemy fire during a bombing mission in May 1944. Many other Veronans received purple hearts for their service.
- Advertisement -

The signs that have been installed were first shown to the public during this year’s Memorial Day parade, when they were carried down Bloomfield Avenue. Some were held by Boy Scouts and Girl Scouts, but many were borne by family members. You can watch the parade again here: