Should Town Hall Keep All The PILOT Money?

Town trucks plow school lots. Town lawnmowers cut school grass. At the Town Council meeting on February 17, Town Manager Joe Martin claimed that the municipal government does $100,000 in work on behalf of Verona public schools each year that it does not bill to the Board of Education. In a follow-up phone call, the spending grew larger still: Martin ticked off a list of items that he said totaled as much as $400,000. Martin believes that this un-billed spending justifies the town’s refusal to share any of the special revenue from the luxury Hilltop apartments with the school district.

But should it? And who should have a say in that decision?

This is a story about taxes, so it might get dry in spots. But stick with it, because there is a lot of money at stake right now and there will be a lot more money at stake in the future. Money that affects how much you will pay in property taxes and how much can be spent on any children you have in public schools. Verona currently has three properties covered by a payment-in-lieu-of-taxes, or PILOT, a special arrangement that gives virtually everything to town government and nothing to the schools. Nothing. Even though there are school-age children living in two of the three properties. Nothing, even though every other taxable property in town contributes to the cost of public education here. New Jersey’s state comptroller took a sharp look at PILOT arrangements five years ago, and now some people in Verona are starting to do the same.

That could be a good thing because there could be more PILOTs in our future. 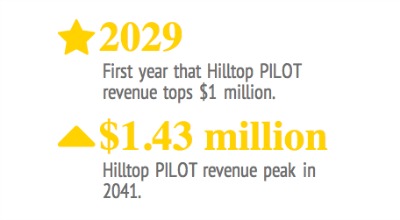 Regular property tax revenues in Verona are parceled out to the public schools, the town government and Essex County, with roughly 55% going to the schools and 25% and 20% respectively to the two government entities. The two buildings known as the Highlands at Hilltop pay tax this way on the value of the land under them. But the improvements to the lots–the luxury apartments themselves–are covered by a PILOT that sends 95% of the payment to the town and 5% to the county. The BOE gets nothing.

Some Verona residents, concerned about the steep cuts in state aid to education and the prospect of PILOT agreements on the redevelopment of the Annin Flag building and former Brunner auto dealership, say that PILOTs shortchange the public education that has been the bedrock of Verona’s attractiveness to homeowners. They are calling for all PILOT monies to be shared with the BOE just as property taxes would be. (Their remarks at the February 3 BOE meeting start at the 1 hour 8 minute mark of the video below.)